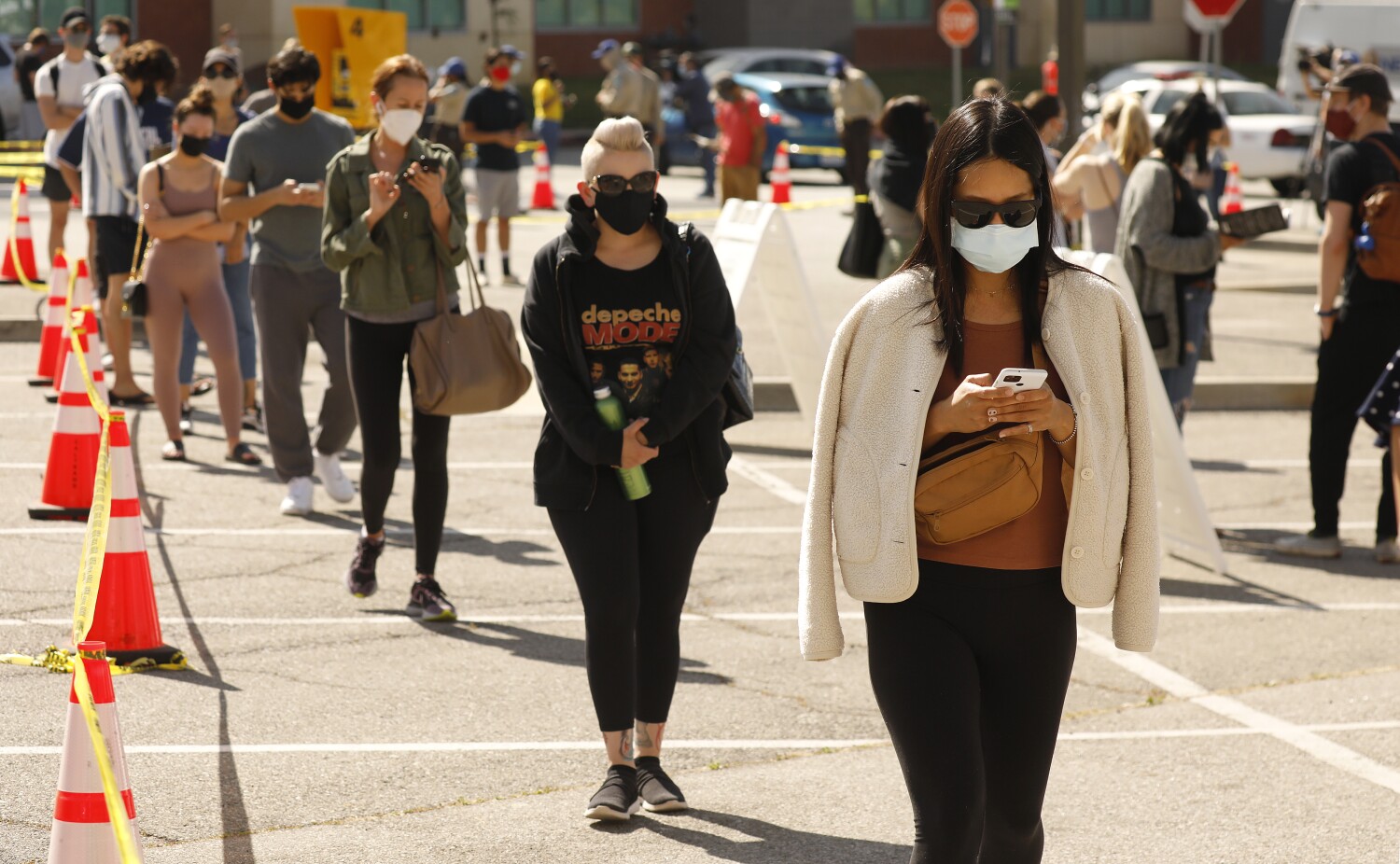 For months they waited for the COVID-19 vaccine. On Thursday, their turn finally came.

The mass vaccination site at Cal State Los Angeles opened up to any adult in Los Angeles County — a first for the region — and the lines quickly jammed with teenage college students and young professionals. Some showed up with their dogs, others rode in on skateboards or bikes. Many were with their parents and friends, eager to finally get some freedom from the pandemic.

“I would like to see my grandma,” said 18-year-old Aidan Weber, who caught the bus over from Los Feliz. He also had big plans for a night of Dungeons and Dragons with friends. “We’ll get some chips together, a couple of sodas. Finally I get to see my friends and family.”

Many of the people who filled the Cal State L.A. site weren’t going to be eligible for a vaccine until April 15; but public health officials opened up eligibility one week earlier because, in recent days, there were far more doses than patients.

Thousands of appointments had gone un-booked by eligible people through the MyTurn registration system, according to officials. The site, where the single-dose Johnson & Johnson vaccine was available, has the capacity to administer about 7,000 doses per day.

The announcement Thursday that any adult could get a vaccine between Thursday and Sunday prompted an immediate and overwhelming response. Appointments started filling fast, and by Thursday morning, the site had so many walk-ins that staff had to start turning some people away, officials said.

Thursday evening, state officials announced that the turn-away policy will continue on Friday for adults who don’t have a COVID-19 vaccine appointment, though a few slots remain available for eligible people — those 50 or older; those with underlying medical conditions; and people working certain essential jobs, such as healthcare, education, child care, emergency services, and food and agriculture.

For the rest of Friday and through the weekend, “the only way to assure yourself of a vaccine is to make an appointment ahead of time,” said Brian Ferguson, a spokesman for the California Governor’s Office of Emergency Services, which is running the site with the Federal Emergency Management Agency through Sunday evening. Management of the site will be turned over to the city of Los Angeles on Monday morning.

By late Thursday morning, traffic was backed up for nearly a mile around Cal State L.A. as motorists visited the campus. Traffic congestion was so bad that one point, a freeway offramp had to be shut down.

Those lucky enough to arrive before 1 p.m., when officials shut down walk-in appointments, were shepherded to the shaded ground level of a large parking structure, where they waited excitedly in rows of white folding chairs. They left with green bracelets on their wrists and smiles on their faces.

Mike Carson, 39, battled traffic for 2½ hours to get from Long Beach to the campus. He persisted, he said, because he didn’t want to catch “The Rona.”

“When they announced on the news yesterday that this was opening up and they have these open spots, I was like, I’m just gonna go and try to get it done early,” Carson said. His only plan after was to go to In-N-Out.

“It’ll be nice to eventually feel safe to travel,” he added.

Skye Wingo, 27, and Toyoko Kumasaka, 26, looked gleeful as they exited the parking structure. The friends went together at Wingo’s urging.

“I just wanted to make sure I wasn’t continuing the problem,” said Wingo, who works as a writer’s assistant.

He’s looking forward to going out to “dance to all these TikTok songs” and maybe taking a road trip to Seattle,” he said. “I think it’s time, at least for my age group, that we feel comfortable to explore and not worry that we’ll hurt someone.”

Jack Thomas Salcido, an 18-year-old who helped his grandmother get vaccinated earlier this year in a process that lasted nearly three hours, was impressed.

“It was really quick,” he said. “We were walking the whole time, we only stood still for, like, five minutes.”

Despite expectations, many who got vaccinated Thursday at Cal State didn’t have any big plans for immediately after. In fact, most — including the youngest — were just looking forward to spending time with more vulnerable family members.

“I have parents that are older, and I’d like to be able to see them soon,” said Ethan Henes, a 21-year-old student at Occidental College, who came with a friend. “One of the biggest reasons I got the shot was that I wanted to feel more secure while I was travelling. Now that it happened, I guess I can start making plans.”

Other counties across that state have also decided to move faster than advised by the state to allow all adults and some teenagers access to the vaccine, including Kern, Riverside and San Bernardino counties. Orange County is allowing anyone 16 and older who lives in four ZIP Codes hard-hit by the COVID-`19 pandemic — 92701 and 92703 in Santa Ana, 92805 in Anaheim and 92844 in Garden Grove — to be vaccinated.

Long Beach announced Thursday that it too will begin vaccinating all people 16 and older as walk-ups at the Long Beach Convention Center, which operates Monday through Saturday.

Melissa Simock, 47, traveled to the campus from West Hollywood with her two elderly pugs after seeing a friend’s post on Facebook.

“I wanted to get it out of the way. Plus, they’re doing Johnson & Johnson, so it’s one-stop-shop,” she said.

Simmock says the process was “fast and easy, very organized,” which was especially nice for her dogs, one of which is disabled. “Where I go, they go,” she said.

WINTHROP (CBS) – The number of new coronavirus cases for …