A version of this article was published in It’s Not Just You, a weekly newsletter from TIME editor-at-large Susanna Schrobsdorff. Subscribe here to get your weekly serving.

You’ve done all you can do today, tomorrow you get to try again. #breathe.

🌞 Well hello! I’m so glad you’re here. This week we have a conversation with Pulitzer Prize-winning columnist and author of the bestselling novel, Daughters of Erietown @ConnieSchultz about empathy, Twitter, and the art of breathing.

The Gods of Small Kindnesses

A few times a day, Connie Schultz, the Pulitzer-Prize winning columnist and bestselling novelist performs a small pandemic-era miracle on Twitter. It’s pretty simple: she reminds us to breathe, just #breathe. From those small daily bids for connection, she’s carved out a whole swath of empathy in the snarkiest corner of social media, a kind of empathy brigade.

Sometimes Connie posts a goofy photo of her kids or grandkids with that reminder, sometimes she just gives us permission to let go of a tangled day without self-recriminations by saying: “You’ve done all you can do today, tomorrow you get to try again.” Day in, day out, she’s there asking us to pause, to exhale fully so we can move forward. 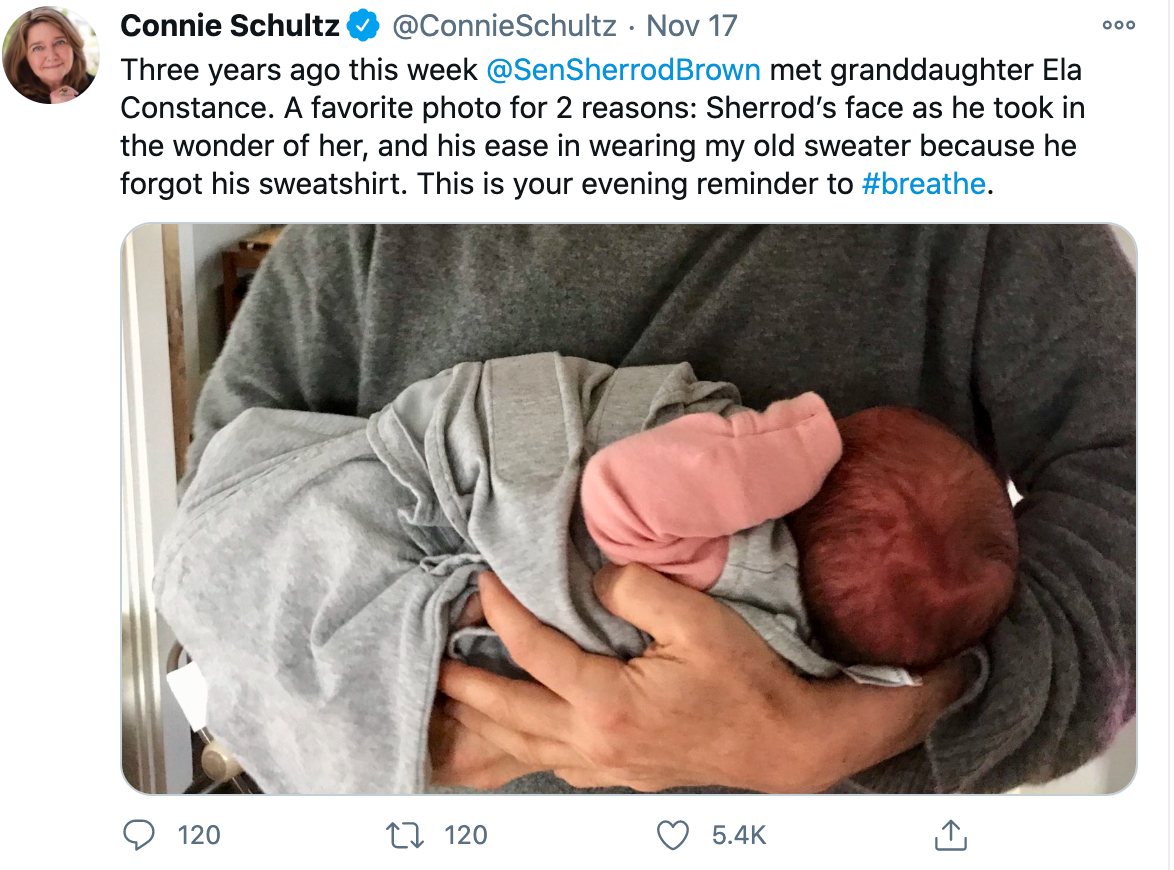 You’d think a tiny balloon of sincerity would get lost or mocked in an arena where we crave new distractions, new outrages, newer news, snarkier snark. But the opposite has happened. She’s been flooded with gratitude from her more than 200,000 followers. They send notes about their lives, their problems, their hopes, and they interact with each other kindly, proving Connie’s theory that there’s room for tenderness on Twitter.

“I was unprepared for this kind of response,” she says. “I’ve been so touched by these confessions, totally unrelated to me sometimes–just threads where people really get into the weeds on how hard this is–and by how quickly others swarm to comfort them.”

At the start of the pandemic, when Connie had to remind herself to take deep de-stressing breaths, she decided that reminding her followers to do the same was a small thing she could do when it was hard to know what to do. It resonated. “People want to know that they’re not alone, to feel that they’re not losing their minds if they’re scared or worried– that we all need a reminder to breathe.” 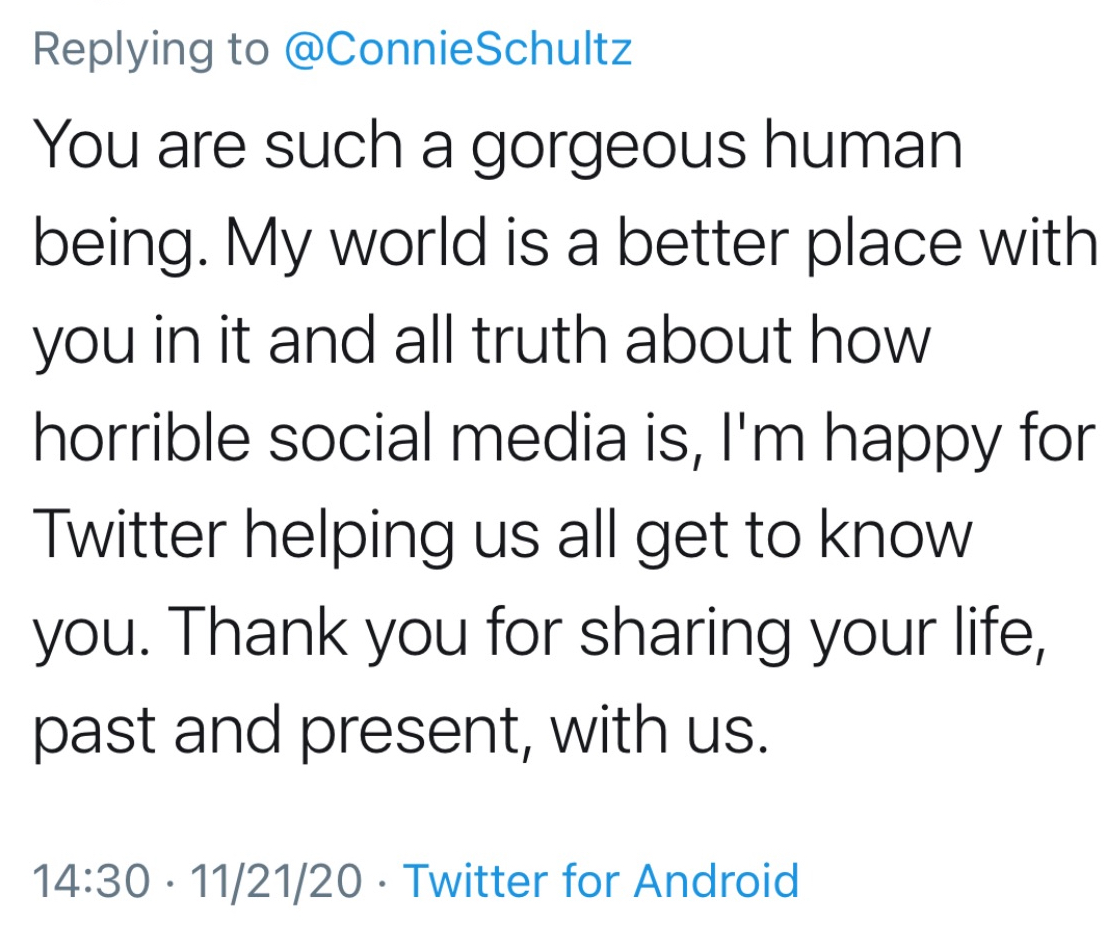 Connie says she realized just how hungry people were for connection during the summer of 2019 when she posted a piece about her brother’s suicide. She braced herself fearing the worst reaction, it was the internet after all. But she thousands of compassionate responses, many of them from other survivors. “I was overwhelmed,” she says. “I realized they’d lost someone to suicide, and they feel like you…There’s so much shame attached to it, which makes the grieving so much hard because you can’t reach out to people.”

Reading the threads on Connie’s Tweets makes you believe that vulnerability is still the most generous of gifts–even on social media. So does Chrissy Teigen’s courage in sharing the searing reality of her miscarriage giving comfort to so many women who’ve lost a child. She too says she was met with overwhelming love.

This brings me to some of the beautifully honest readers of this newsletter who’ve sent me their stories privately these last few weeks. The kind souls who’ve been isolated for months alone in pandemic quarantine because of serious health conditions wonder if they’re the only ones feeling crazy or angry. They’re not. Neither are those whose kids struggled with the kinds of issues that are hard to talk about in ordinary times, much less during a national crisis with so much loss. Neither are the caregivers who’ve been shouldering so much for so long on their own, and they’re afraid of breaking.

All of you have pushed forward with such love and humility, I’m in awe.

Summoning gratitude isn’t easy in a year like this. But evidence of human kindness is out there. And also canine kindness. For one of my readers, that evidence showed up earlier this year in the form of a rescue dog who arrived just when she was needed. Her owner says that this dog has been “a constant reminder to look into the storms and find the beauty in the process. To walk when you want to run, to sit and breathe when you really could hyperventilate.”

Rockefeller the Owl has recovered and is about to be released securing his spot as the best thing about this week in 2020. 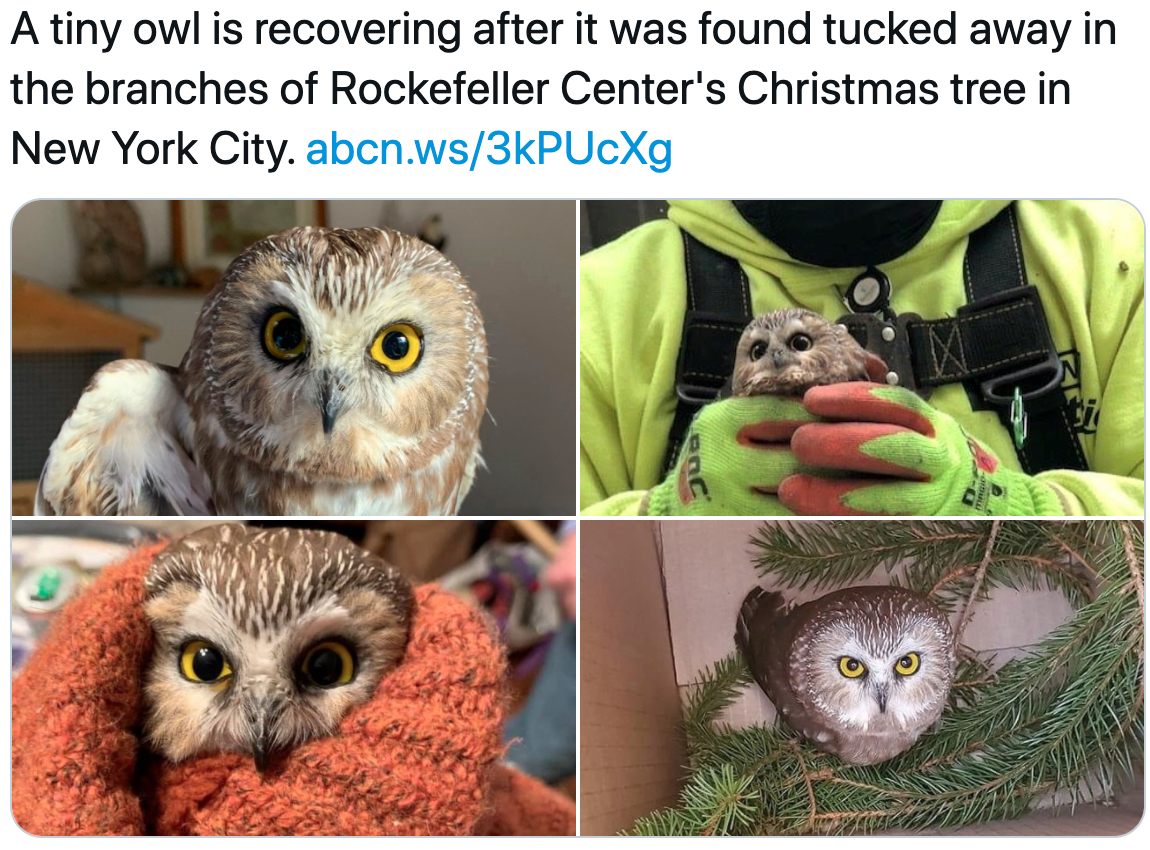 😠 🤗 The Best Alternative to Outrage Scrolling Check out this profile of Smith College Professor Loretta J. Ross who advocates calling people “in” instead of publicly calling people out for some transgression. “I think we actually sabotage our own happiness with this unrestrained anger,” says Ross. “Calling in” is like calling out, but done privately and with respect. “It’s a call out done with love,” she says.

🦃 How to Tell Your Family You’re Not Coming Home for the Holiday “It’s a conversation you don’t want to put off.” writes TIME‘s Belinda Luscombe.

🎈 Ways to Breathe Better and Ward Off Anxiety Did you know there’s a phenomenon called “email apnea,” where multitasking office staff breathe irregularly and shallowly, or even hold their breath, for half a minute or while on their devices? Here’s why you should breathe through your nose, slow your breathing down (to five or six seconds in and five or six seconds out), and extend your exhales.

Eileen is a self-described liberal, feminist, hippie-New Yorker. A retired social worker, she worked primarily with the LBGTQIA+ and immigrant populations. In early April she was matched by Pandemic of Love with a single mother named Christine in Mobile, Alabama who needed help.

Eileen describes the initial shock of the connection as one between “two very different people from two very different worlds.” When Eileen found out that she had voted for President Trump in the last election and was planning on voting for him again, her initial instinct was to ask to be reassigned to another family. Christine had the same thought at the start, “to be honest, I didn’t think I was going to like her when we met. She is a New Yorker and I am just a Southern girl at heart.”

But the pair decided to move forward. And since July, Eileen has been sending Christine and her family bi-weekly help for groceries and essentials and upon learning that Christine’s 8-year old daughter loves to read, she started to send her books. “I honestly do not know what I would have done without her all this time,” says Christine.

The two unlikely friends speak and text frequently, and have talked about everything from the Holocaust to the Confederate Army. Christine is certain she and Eileen will be friends for life. And while Eileen began the relationship thinking Christine was living in a red-state bubble, she says she’s shocked to realize “how long I have been living in a bubble, too.” 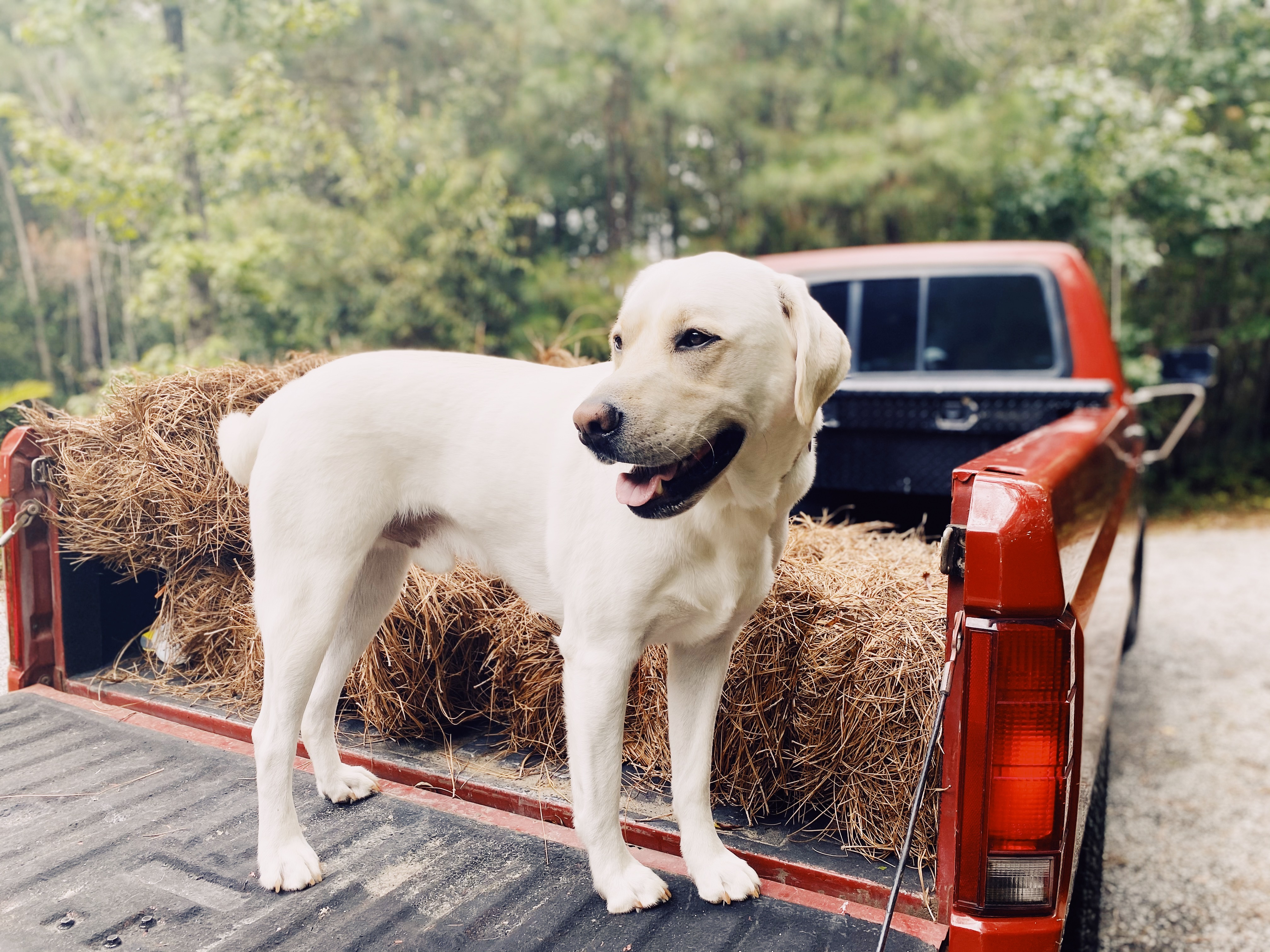 🏵️Meet Ziggy shared by Debbie of Fayetteville, AR. who says Ziggy has been bringing her joy for 10 years. 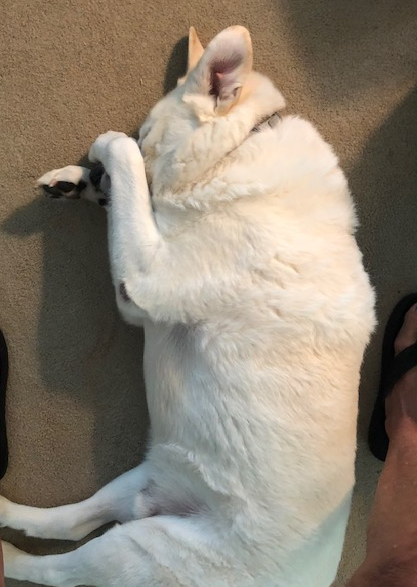 🌟 Here’s loyal Koko shared by Mary who says she wouldn’t have made it through months of quarantine without him. 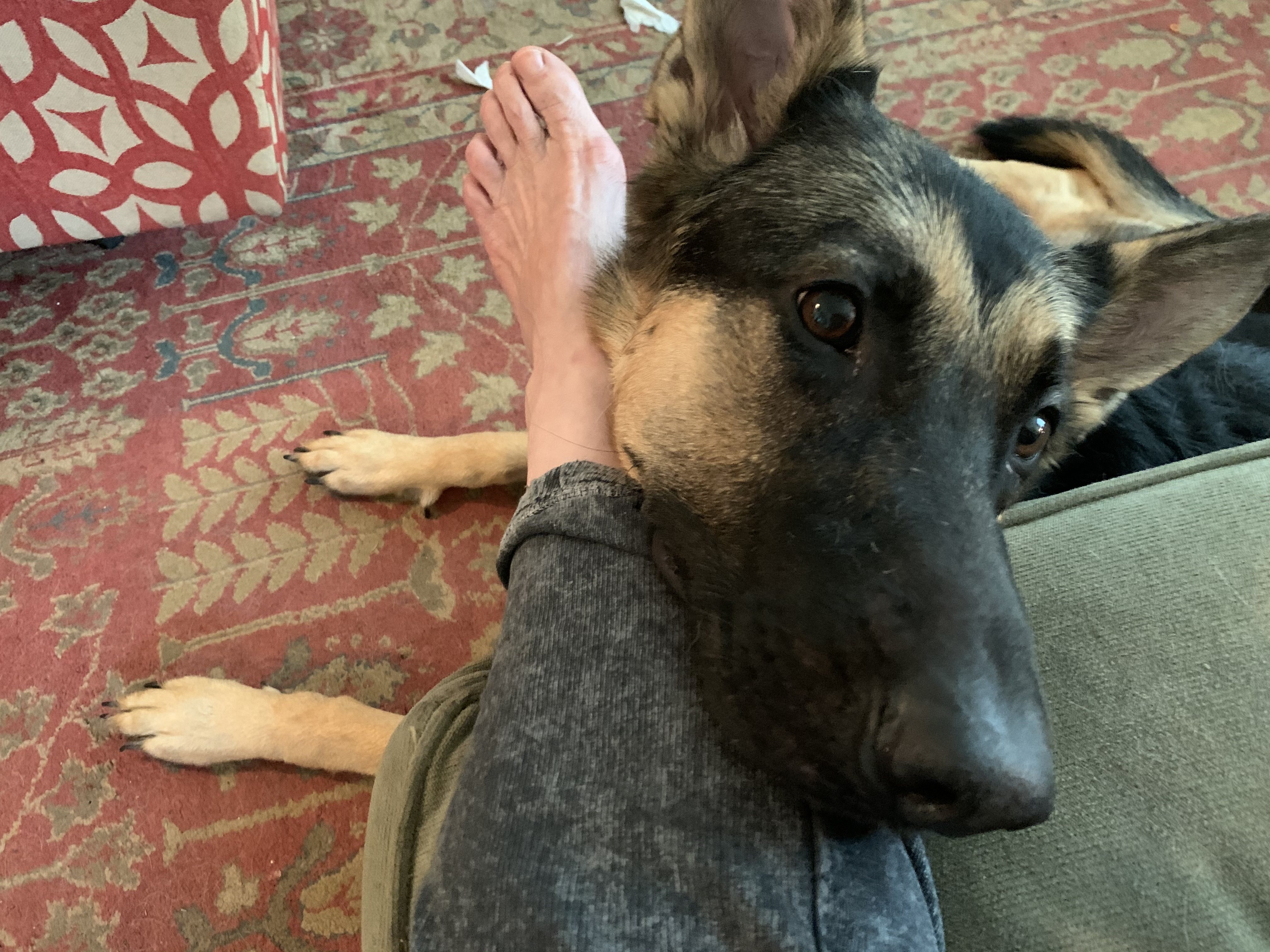 🏵️ And here’s Jen, shared by Andrea of Suwanee, GA who says Jen is very Zen. Seriously, she and Andrea meditate together. 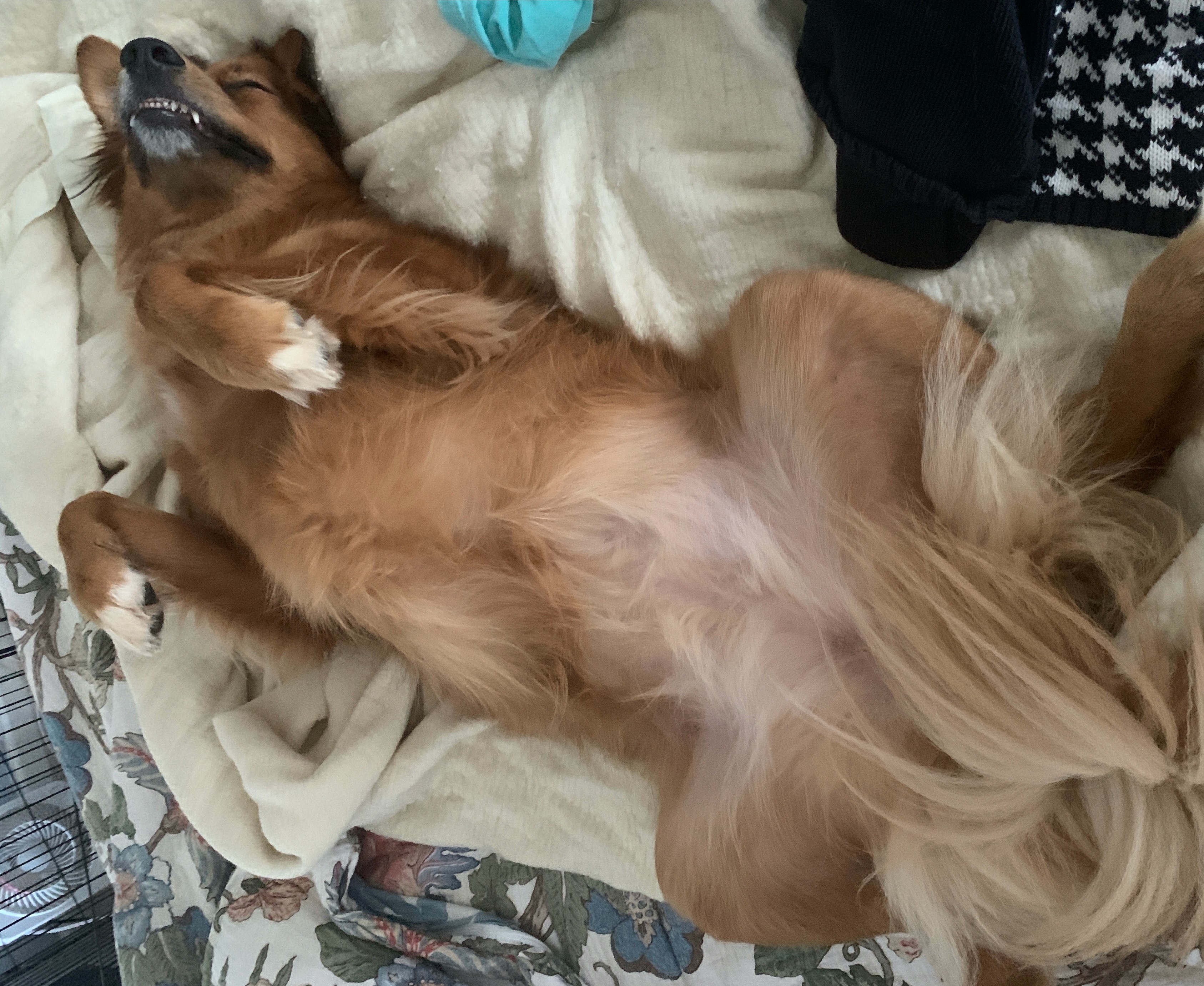 🌺 Did someone forward you this newsletter? SUBSCRIBE to It’s Not Just You by clicking here.

Sign up for Inside TIME. Be the first to see the new cover of TIME and get our most compelling stories delivered straight to your inbox.

For your security, we’ve sent a confirmation email to the address you entered. Click the link to confirm your subscription and begin receiving our newsletters. If you don’t get the confirmation within 10 minutes, please check your spam folder. 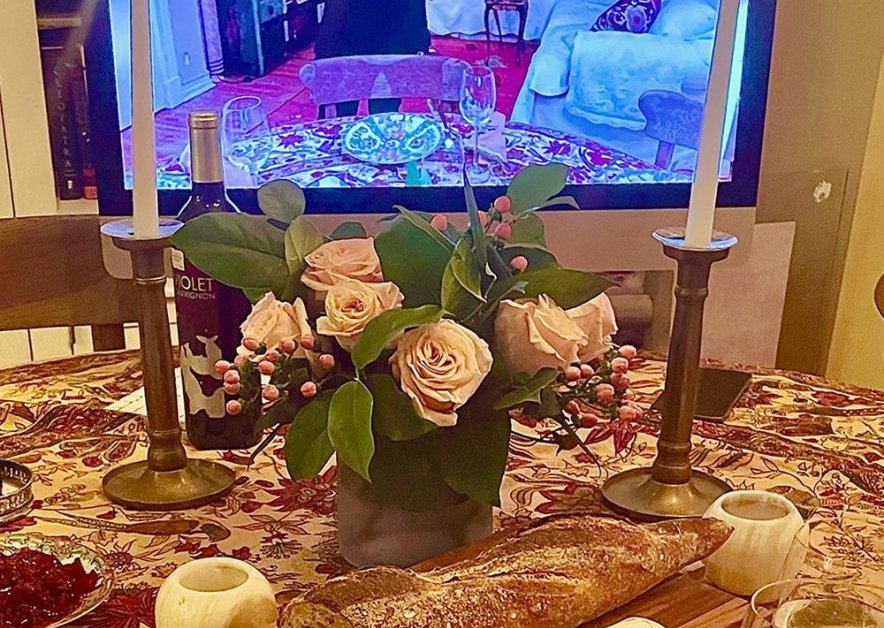 Zoom Holidays and the Psychology of Non-Verbal Communication 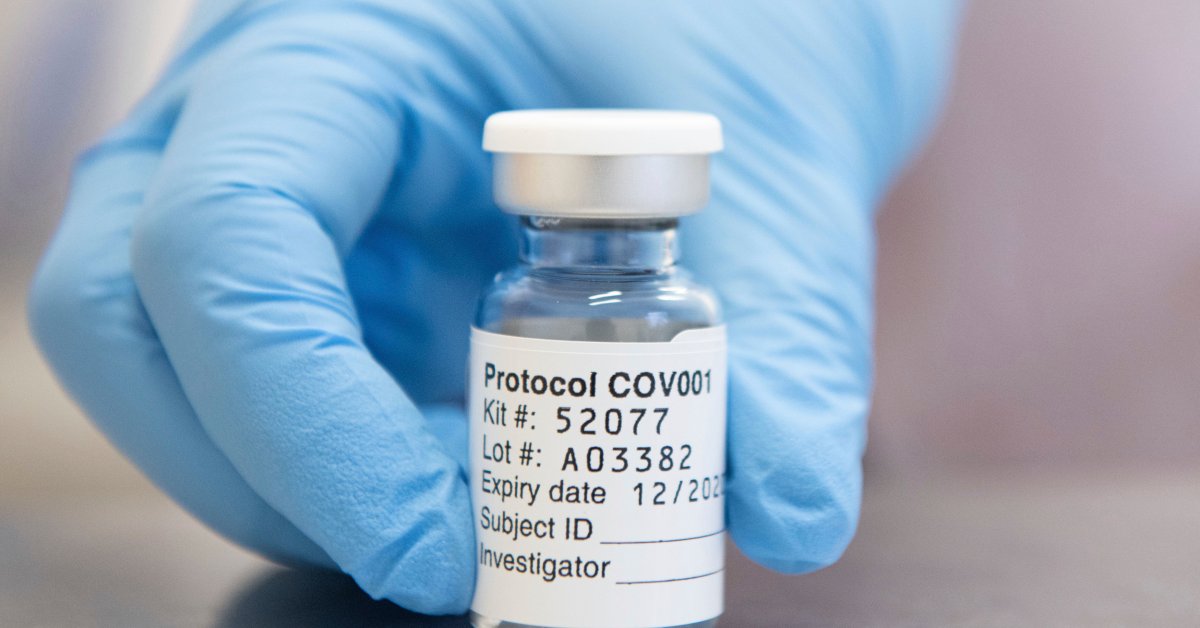 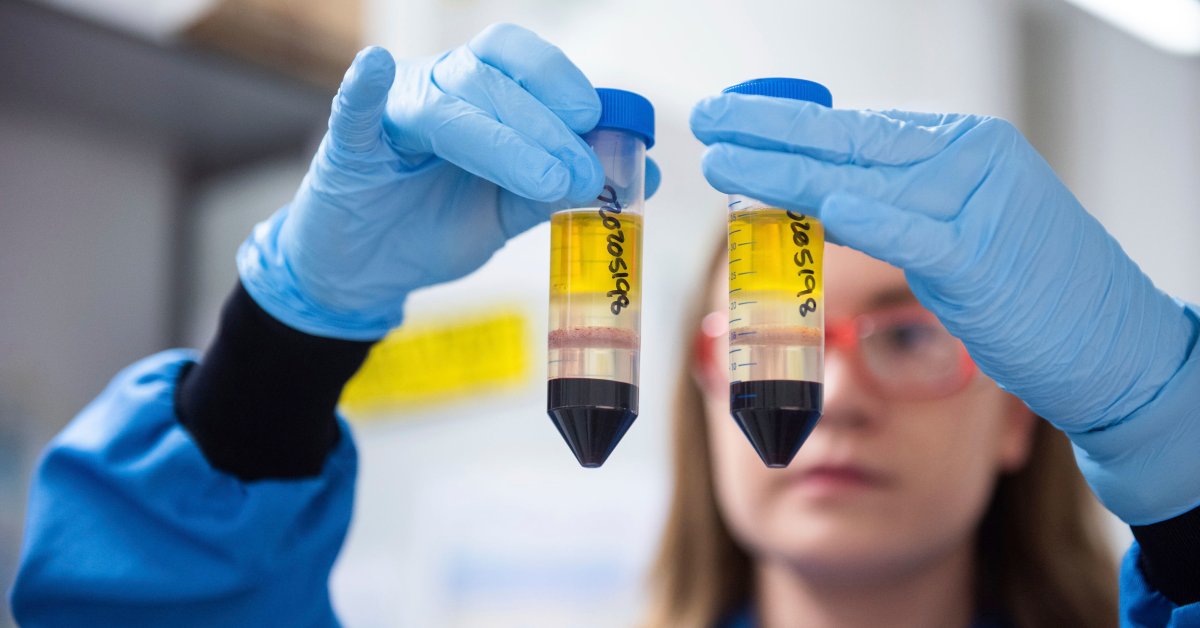 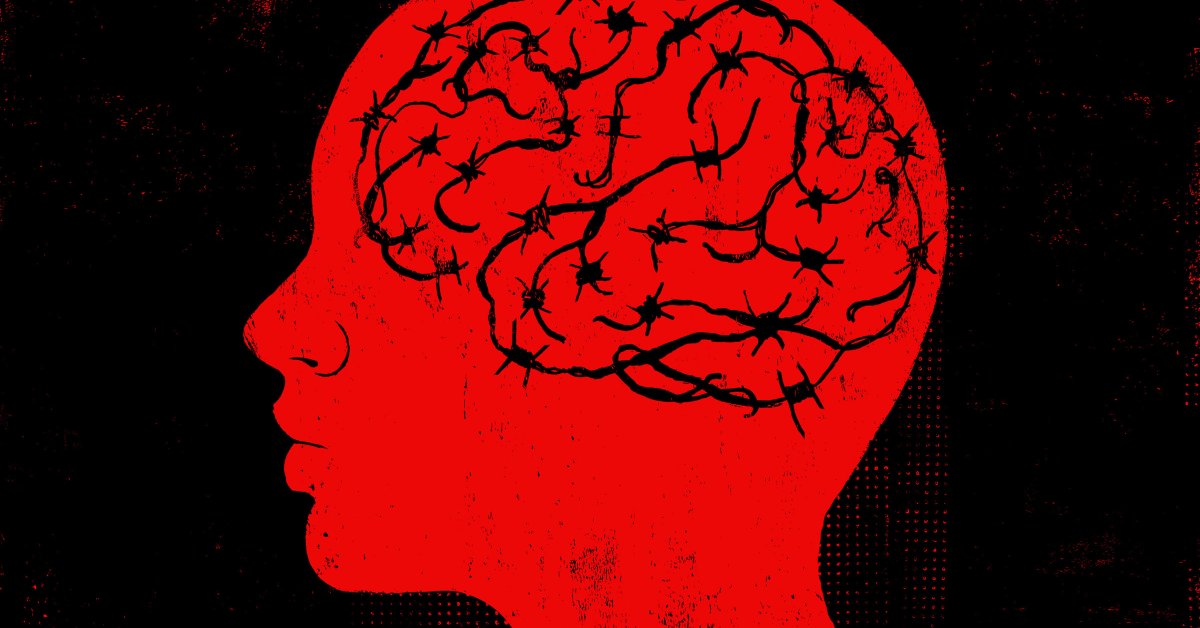 Inside Mental Health Care For Families Separated at the Border 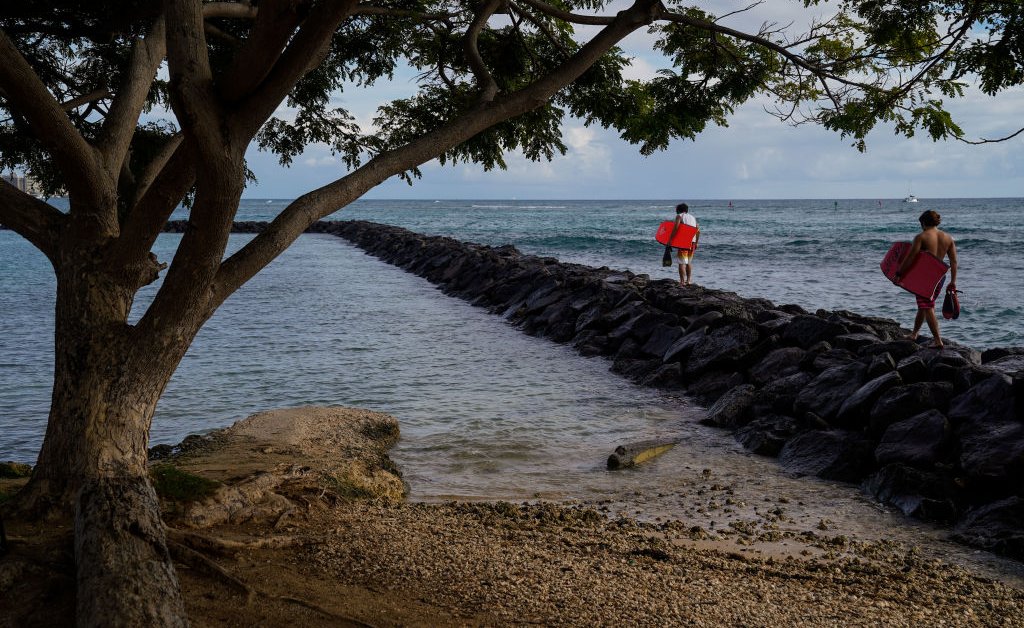 Hawaii Is Keeping COVID-19 Under Control. Why?