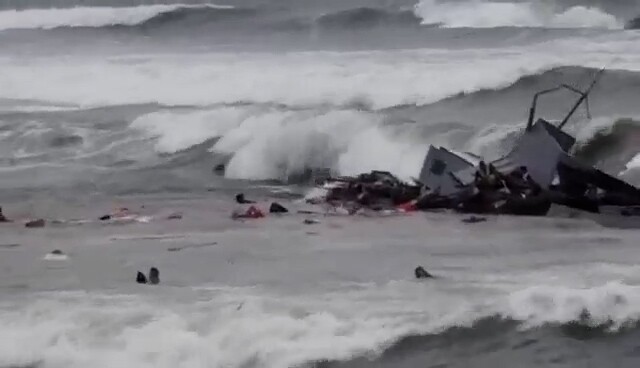 In the waters off San Diego, the smuggling boats often cloak their cargoes of migrants under cover of darkness. Only the hum of the panga boat engines signals their approach to slumbering coastal neighborhoods.

But on Sunday morning it was clear and bright when Cale Foy spotted a horrible sight unfolding at the base of the craggy cliffs of Point Loma.

A 40-foot trawler-style boat had crashed into the rocks, spilling men and women and a teenager into the pounding waves and a rip current so strong that it was dragging some farther from shore.

Foy, a naval aircrewman on a hike with his family, didn’t hesitate to dive into the choppy surf.

“Once I saw people in need, the switch came on and I was at it,” said Foy, who has had rescue-swim training in the Navy. “Our motto for our rescue swimmers is: ‘So others may live.’ I guess that was the exact thing I was doing.”

Out of the 32 people on the boat, 29 survived. Seven were rescued from the water, six of them from floating debris where Foy and another man had left them. Another was hoisted up a cliff. Three people died, a man and two women, who were 35 and 41 years old.

All but two of the people onboard were Mexican nationals, according to U.S. Customs and Border Protection. One of the individuals was from Guatemala and the other, the captain of the boat, was a U.S. citizen taken into Immigration and Customs Enforcement custody.

Aside from the suspected smuggler, there was an unaccompanied 15-year-old boy, along with 21 men and six women ages 18 to 39.

The deadly incident comes at a time of escalating maritime smuggling attempts into Southern California and a recently announced effort by federal authorities to disrupt the trafficking. Smugglers have been taking to the sea to avoid beefed-up enforcement on land as well as Title 42, officials have told The Times. The policy, invoked under a controversial order from the Centers for Disease Control and Prevention, effectively closed the border to migrants.

On Thursday, Customs and Border Protection Air and Marine Operations intercepted a small wooden panga-type vessel with 21 people aboard 11 miles off the coast of Point Loma. The following day, hoping to head off more risky attempts, officials announced extra resources dedicated to coastal patrols covering the land, air and sea. The operations were set to last through Monday.

“We announced it in advance to try to deter as much as we could to kind of send the message to smugglers, the ocean is inherently unsafe,” said Supervisory Border Patrol Agent Jeff Stephenson. “With water temperatures being what they are … it’s a very dangerous scenario.”

Foy was on a family outing with his wife, two sons and daughter when they first spotted what appeared to be an empty boat getting closer to the shore. While hiking, Foy kept looking back at the boat getting pulled closer to shore, as if it “didn’t have any power.”

It was about 10 a.m., and lifeguards had been alerted that a vessel was having trouble near the surf line, but no emergency crews had arrived yet.

When Foy spotted people jumping into the ocean, he handed his wife the car keys and his phone.

Another man, in training to be a Navy SEAL, joined Foy in the rescue. Foy warned him this would not be a controlled environment, calling it a “life or death situation.”

Few were better suited for the rescue: Foy is a naval aircrewman who flies in the back of helicopters. One of his responsibilities is rescues at sea.

In the 60-degree water, the men swam around debris and plowed through 5- to 6-foot surf. They rested on what appeared to be the top of the boat’s cabin, where they caught their breath and came up with a game plan. The floating debris, they decided, would be their “casualty collection point.”

In normal circumstances, Foy would be in a helicopter, able to see everything from above, able to execute the rescue with the proper gear. This time, he got help from a man standing on the rocks, who pointed them to the passengers.

Foy and the other man took six people, both conscious and unconscious, to the debris, where they could cling for life until they could be rescued. The boat’s passengers didn’t have flotation devices, Foy said.

The spotter directed Foy to an unconscious woman about 75 yards away. When he reached her, he encircled her chest with one arm in a cross chest carry, intended for rescues through heavy surf.

Soon after, a lifeguard boat arrived to assist. Foy helped do CPR on the rescue boat all the way back into the San Diego port. The 45-minutes Foy was in the water “felt like an eternity,” he said.

Lifeguard Lt. Rick Romero, a 28-year veteran, arrived at a scene unlike he’s ever seen before. The boat had completely broken apart, leaving only a debris field. Most of the passengers were able to swim to the shoreline, but Foy had helped several people floundering in the water, some facedown or getting ripped out by the current.

A lifeguard was sent immediately from land to make rescues in the water and another to do medical triage on the beach. Two personal watercraft and two rescue boats also arrived within minutes.

“I’m surprised there weren’t more casualties, to tell you the truth,” said Romero, with the San Diego Fire-Rescue Department. If the boat had capsized 20 to 30 yards west in deeper water, Romero said, it could have been much worse.

“If it was in deeper water, I think the numbers would have gone up for loss of life,” he said.

Romero commended the rescue effort of the two men, including Foy.

“This guy [Foy] jumped in and was assisting people immediately, he swam out and helped save someone,” Romero said. “He was a huge help.”

Video footage from the scene showed people jumping off the side of the boat as waves crashed into it. The boat bounced back and forth and, with each swell, disintegrated further, leaving people bobbing in the ocean. Orange lifeguard jackets washed up on shore.

Romero said Sunday’s incident was the biggest smuggling attempt he had ever encountered, with the traffickers using a larger-than-average boat and carrying more people than normal.

The incident is the latest in a two-year surge. In fiscal year 2020, Border Patrol agents detained about 1,200 people during maritime smuggling attempts — a 92% increase from the prior fiscal year, Stephenson said. So far, in fiscal 2021, there have been 156 maritime smuggling incidents and 909 arrests.

Survivors suffered hypothermia and other injuries caused by the breakup of the boat, officials said. Five are still in the hospital, and one remains in critical condition. On Monday, the Coast Guard suspended its search for any other boat passengers.

“We believe we have everybody,” U.S. Coast Guard Lt. Cmdr. Matthew Kroll said.

“The sea is very unforgiving, especially when it starts to warm up in the May, June time frame. It’s kind of a false sense of security that it’s safer, but the water is still very cold,” Kroll said. “It’s not as easy and as risk free as people may think it is. It’s an extremely dangerous route to take.”

After the rescue, Foy was separated from his family. He headed to the Port of San Diego by boat and didn’t reach the dock until two hours had passed. Then he caught a ride home to Coronado and told his family the story of what happened after he left them on the hiking trail.

Numbers in the Washington region mirror a national trend, a …