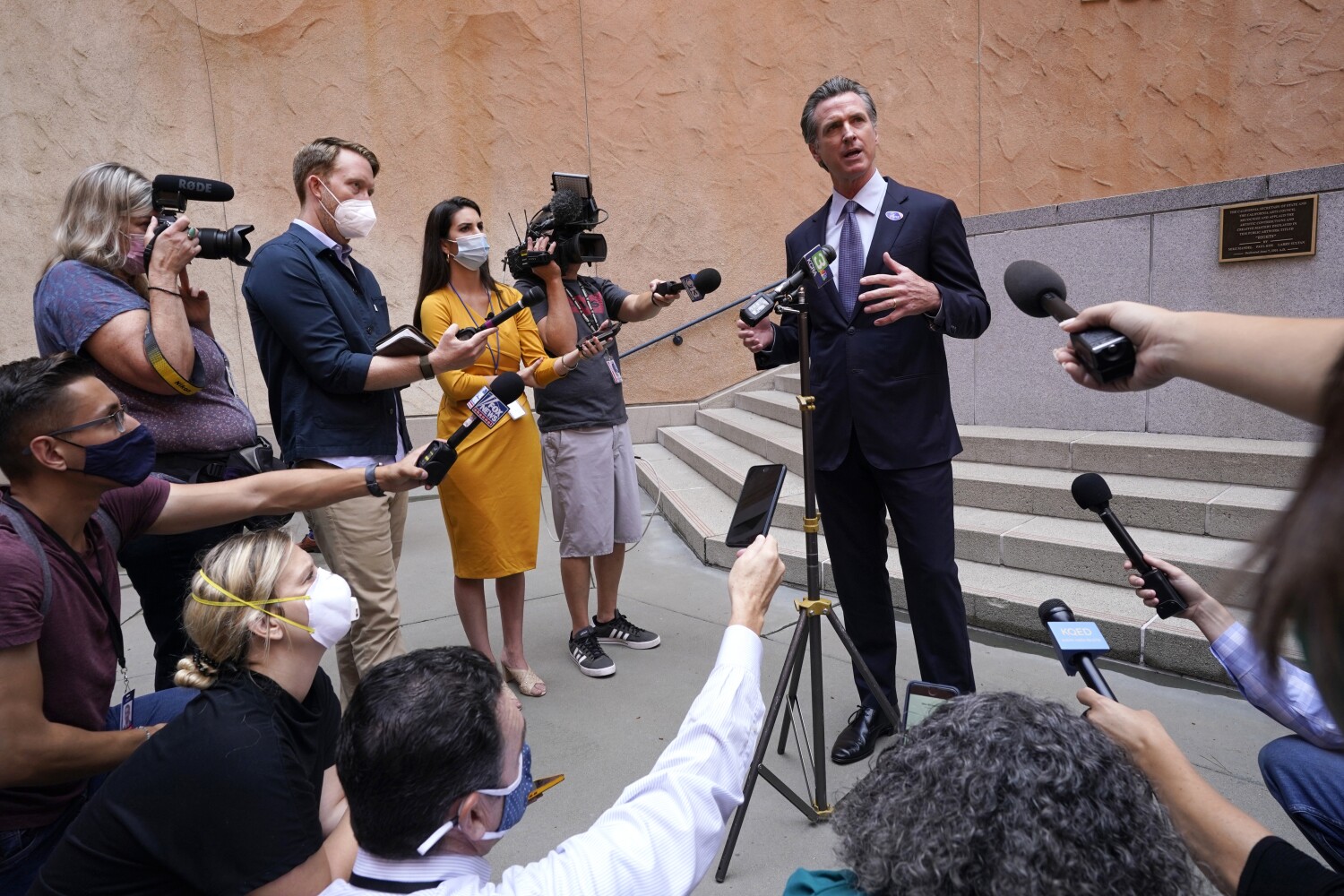 Three days before the recall election, California’s candidates in the gubernatorial race were leaning into their last hours to sway voters, making campaign stops to commemorate Sept. 11, take shots at one another and squeeze in a few bites of pulled pork.

Gov. Gavin Newsom’s campaign landed Saturday at a community services center in Oakland, where he argued that his removal would set back work to help disadvantaged Californians and hurt efforts to protect the public from COVID-19.

Newsom said Republican candidates seeking to replace him would roll back mask mandates and other protections that have allowed California to reduce hospitalizations and deaths compared with other states.

“The stakes could not be higher,“ Newsom told a supportive crowd of some 100 union workers during a midday rally at St. Mary’s Center, which provides housing and nutrition to senior citizens facing homelessness, as well as a preschool program for the children of low-income families.

He singled out for criticism Republican challenger Larry Elder, who leads polls among replacement candidates.

Earlier in the day, Newsom laid a commemorative wreath at the Wall of Heroes at the National Guard headquarters in Sacramento, which honors California National Guard soldiers killed in Iraq and Afghanistan over the last 20 years.

Around the time that Newsom was calling him out, talk radio host Elder was making his own rush of appearances to round up votes a few hundred miles to the south.

The 24½-year veteran of the National Guard said he’d been listening to Elder’s radio show “since the beginning” and voted for him as soon as he received his ballot.

After removing his maroon tie and rolling up the sleeves of his dress shirt, Elder slid into the green booth next to De Wees for lunch with several other veterans from Veterans Outreach OC.

Elder chatted with the group for about 30 minutes with country music playing in the background and the smell of barbecued meat filling the strip mall restaurant. Elder interjected anecdotes about his military veteran father with some of his campaign talking points.

Earlier Saturday morning from the podium of a Fullerton memorial service, Elder helped read aloud the names of nearly 3,000 people who died 20 years ago Saturday in the Sept. 11 attacks. About 100 people, many dressed in red, white and blue, gathered in the middle of a tree-lined street outside firefighter Scott Townley’s Fullerton home, which doubles as a makeshift memorial to the events of 9/11.

The temporary commemoration exhibit — which Townley assembles on his lawn every September — has grown through the years and now features thousands of flags, hundreds of crosses and a tent with photos of the dead.

A handful of memorial-goers and first responders followed Elder as he left the event, pressing close to the candidate for selfies and well-wishes.

“Mr. Elder, I’m praying for you,” a woman said, leaning in between campaign staffers to shake the candidate’s hand. Theresa, who lives in Fullerton and did not want to give her last name, added that she planned to vote for Elder on Tuesday because she believed he could rescue California from the “hole” that politicians had created.

“He’s not in the deep pockets of everybody,” she said as she walked away.

“We’re the only one around us with a sign,” a woman in a “Land of the Free, Home of the Brave” shirt said, referring to the “Recall Newsom” sign on her lawn a few doors down as shouts of “Good luck, Larry” echoed around her.

Jenner said she had learned about the facility through L.A. County Sheriff Alex Villanueva and wanted to see an organization “doing a great job.” If she were elected governor, Jenner said, the next round of funding for homelessness would go to organizations such as the Dream Center.

“There are so many great organizations that are doing it where the taxpayer gets a good return on their investment,” she said after the tour. “And we have to support those. In dealing with the homeless issue, for me, I’m about solutions. I want results. I don’t want to know how much money is spent, I want to know how many souls did you save?”

At several points, Jenner stopped to hear testimony from those who say they’ve benefited from the nonprofit’s services, including Gravonte Stewart, a 24-year-old from Louisiana who told Jenner he arrived at the Dream Center one year ago, battling addiction.

Jenner listened intently, looking away only to take a bite from a corn dog on the blue cafeteria tray in front of her.

“She was down to earth,” Stewart said. “She sat down and had lunch with us. She was talking to me like I’m her peer.”

He said he planned to vote but had not yet done so. Asked if he supported the recall effort, Stewart paused.

“I don’t know what’s actually going on. Is she running for governor?”

After making a splash in national headlines when she announced her candidacy in April, Jenner’s polling has steadily declined. In a recent poll by the UC Berkeley Institute of Governmental Studies, in collaboration with The Times, she tracked at just 1%. As for a future bid for office, Jenner said it is “to be decided.”

“I’m going to first see what happens here,” she said. “But I will stay involved in politics.”

In addition to using the campaign stop to highlight her views on homelessness, which she described as a top issue affecting Californians, Jenner repeated that people are leaving the state. She pointed out that California lost a congressional seat because of a decline in the population. The state’s regulations, which Jenner described as unfriendly to businesses, are driving residents out, she said.

“We’re the worst state in the union to do business with,” she said. “That has to stop.”

Assemblyman Kevin Kiley (R-Rocklin) urged voters to recall Newsom, arguing that doing so offered a one-year trial of new leadership for the state.

“Take a chance on change,” he said in an interview after rallying supporters in San Jose. “We have another year before we vote again, and this is an opportunity to try something different.”

Kiley argued that his legislative experience gives him the knowledge to get to work immediately if elected governor.

“We have a state government that is totally broken, has been completely corrupted and is not serving the people of our state,” he said. “I know exactly how broken things are, how dysfunctional our state Capitol is. I think I would be in position to act immediately, to move aggressively and boldly to enact reforms that people would feel in their daily lives.”

Despite the attention on competitors, Newsom sounded confident Saturday. Newsom said he looks forward to appearing at a rally Monday with President Biden, who is coming to campaign with him. This week, Vice President Kamala Harris stumped with Newsom, highlighting his pandemic response.

“I’m working hard the next couple of days, leaving nothing out, nothing to chance, taking this very, very seriously, trying to close this out as strongly and passionately and as forcefully as we can,” he said.

Recent polls have shown that most voters favor keeping Newsom in office, and early ballots have skewed Democrat. Despite fears over the summer of voter apathy, Democrats and union members have turned out for massive get-out-the-vote drives in recent weeks.

Newsom was joined Saturday by leaders of the Service Employees International Union California, which represents 700,000 workers, including state and city employees, nurses, janitors and school workers.

The union has been a major player in the anti-recall campaign, highlighting its work with Newsom to expand paid family leave, earned income tax credits and tenant protections against evictions during the pandemic. The union bused in dozens of workers in matching purple T-shirts who cheered the embattled governor.

April Verrett, president of SEUI Local 2015 representing long-term care workers, said the recall is based on “fearmongering and nasty racism.”

“Hands off our democracy and hands off our governor,” she said in a message to recall supporters. 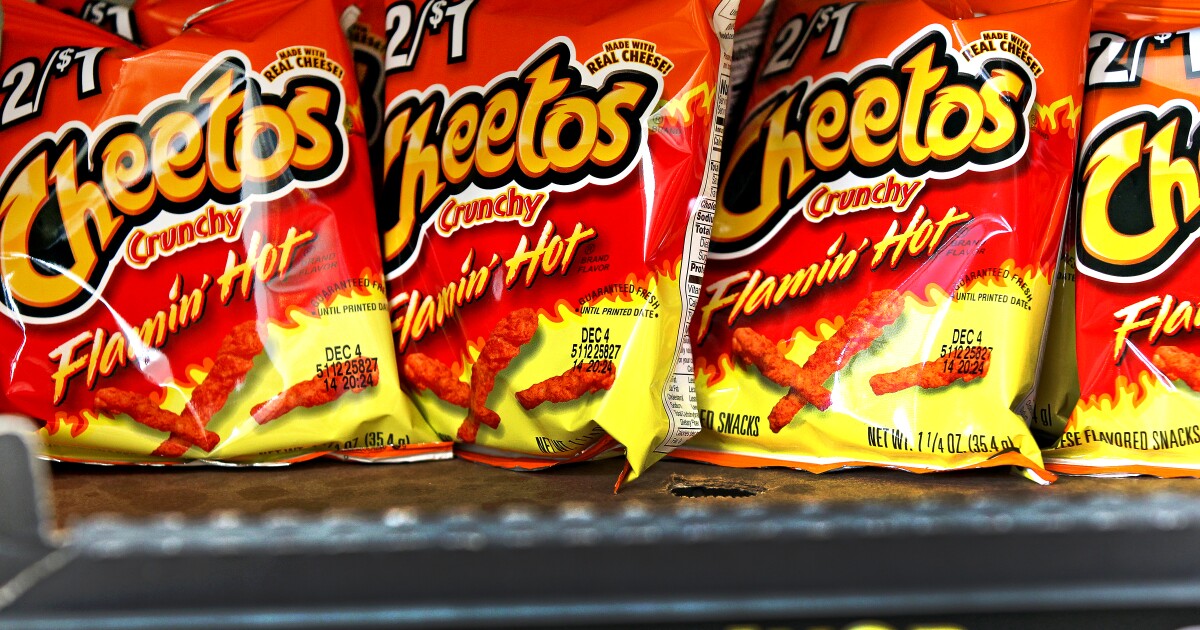 For over 15 years, Richard Montañez told a tale of …