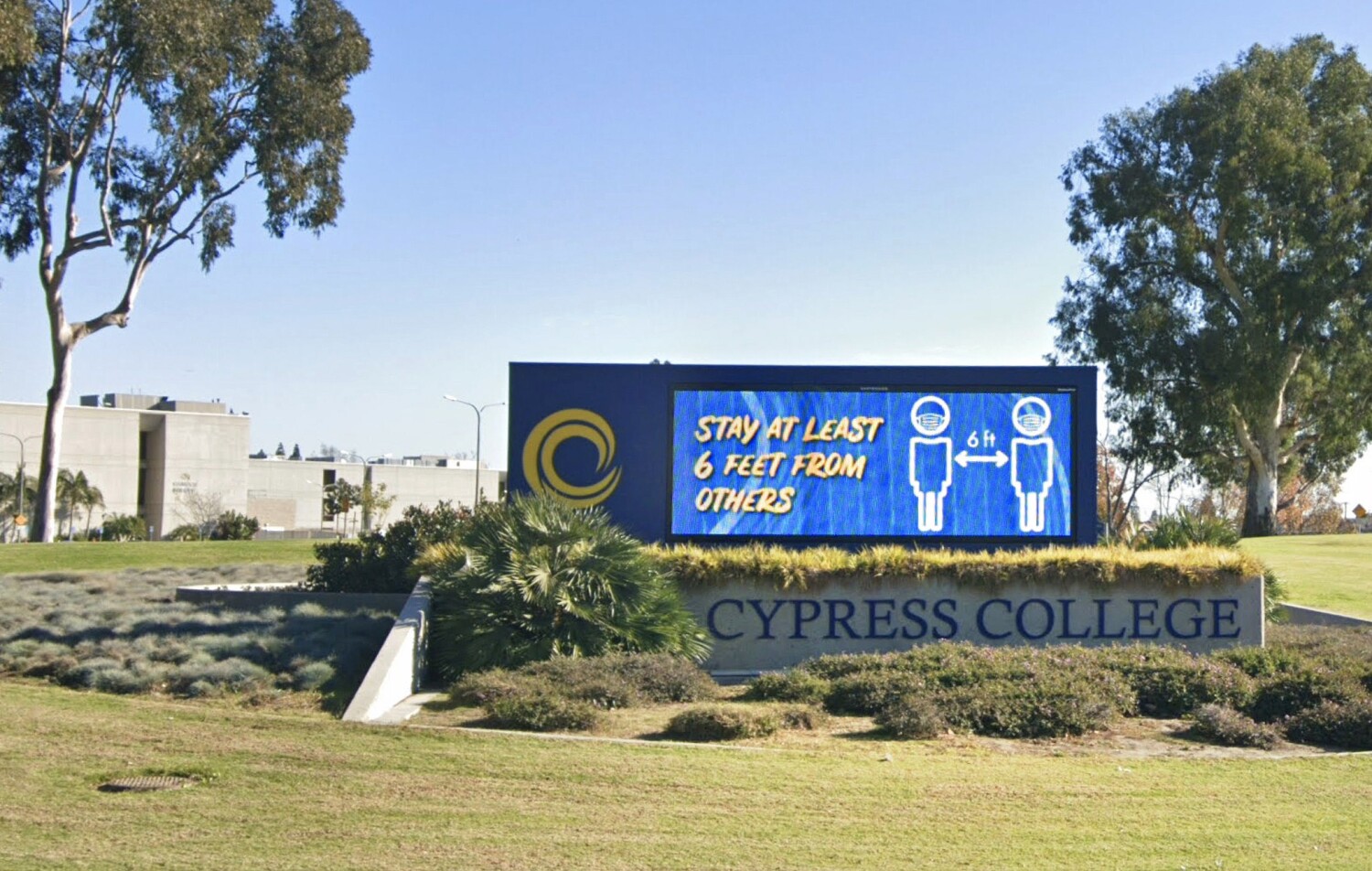 An adjunct professor at Cypress College has been placed on leave after challenging a student who praised the police as heroes in a recorded Zoom class that since has gone viral.

Braden Ellis, 19, was in the process of telling his intro-level communications class that “cops are heroes, and they … have a difficult job,” when his professor interrupts to ask: “All of them?”

“A good majority of them,” Ellis replies. He then tries to say there are some bad actors before the professor — who has not been identified — cuts in again.

“A lot of police officers have committed atrocious crimes and have gotten away with it, and have never been convicted of any of it,” she says, adding, “and I say this as a person who has family members who are police officers.”

Later in the conversation, she pushes back on Ellis’ claim that the police are whom we call when we’re in trouble. She says she wouldn’t call the police: “I don’t trust them. My life’s in more danger in their presence.”

When pressed about whom she’d call if faced with an armed attacker, she says, “I wouldn’t call anybody.”

The professor’s absence will last for the duration of her assignment at the college in northwestern Orange County, according to a statement released by Cypress College on Friday.

“We are reviewing the full recording of the exchange between the adjunct professor and the student and will address it fully in the coming days,” school officials said in the statement.

It was the instructor’s first class at the college and she previously had indicated she would not return in the fall, according to the statement.

Ellis, a freshman, told the Orange County Register that he was giving a presentation on the term “cancel culture” before his professor began speaking about systemic issues underpinning policing, including saying it originated as a system to capture runaway slaves in the South.

“This is what I believe. This is my opinion. This is not popular to say, but I do support our police,” Ellis says at one point during the discussion. “We have bad people, and the people that do bad things should be brought to justice. I agree with that.”

Cypress College said in its statement that it “takes great pride in fostering a learning environment for students where ideas and opinions are exchanged as a vital piece of the educational journey.”

“Our community fully embraces this culture; students often defend one another’s rights to express themselves freely, even when opinions differ,” the school said. “Any efforts to suppress free and respectful expression on our campus will not be tolerated.”

At the end of the recorded class, another student says, “I’m glad you did say that, even if I disagree,” adding, “I may not agree with what you say, but I’ll fight for your right to say it.”

On Monday, the college declined to comment beyond the statement, according to Marc Posner, director of campus communications.

Too many of America’s universities have become indoctrination farms where critical thinking and ingenuity are stifled by the intolerance of simple minded professors like these who are completely unwilling to accept anything but their own opinion as fact. https://t.co/AhHYhwOsu5

The National Fraternal Order of Police, a large police union, responded to the video in a scathing tweet.

“Too many of America’s universities have become indoctrination farms where critical thinking and ingenuity are stifled by the intolerance of simple minded professors like these who are completely unwilling to accept anything but their own opinion as fact,” the tweet reads.

A survey released last year by Gallup and the Knight Foundation on college students’ attitudes toward free speech suggests that many overwhelmingly support the concept.

The survey, which was conducted in 2019, found that more than 80% of the 3,000 full-time students surveyed wanted their campus environment to be a place where they were exposed to all types of speech, even if it was offensive.

However, the survey also found that 78% of students were in favor of having “safe spaces” on campus designed to be free of threatening actions, ideas or conversations.

New Yorkers lined the sidewalks and cars jammed the streets …

PHILADELPHIA (AP) — Joel Embiid has been the early season …