BOSTON (CBS) — Welcome to the new era of the New England Patriots. Growing pains were to be expected, but boy was that a painful loss in Week 1.

New England had a chance to steal a win against the Miami Dolphins in Mac Jones’ debut, but a costly fumble by Damien Harris deep in Miami territory doomed the team’s chances. It was the fourth fumble by the Patriots and the second that the team lost in a frustrating 17-16 defeat to start the 2021 season.

That fumble was far from the only frustrating moment at Gillette Stadium, which left head coach Bill Belichick in a rather grumpy mood late Sunday evening.

“Ball security, penalties, too many little missed things in situational football. All of it,” Bill Belichick said after the loss. “There were some good things, but we didn’t play well enough in any phase of the game. Enough to be competitive and lose by a point, but not enough to win.”

The Patriots are 0-1 to start the season. Here are the Ups and Downs from the team’s Week 1 loss to the Dolphins.

The rookie was pretty hard on himself after going 29-for-39 for 281 yards and a touchdown in his pro debut. He showed some solid pocket presence at times and went through his reads well. He was also excellent on third down, and made some big boy throws while taking some big boy hits.

Those hits he took didn’t seem to rattle him too much, and he promised to be better after the loss. No one doubts he’ll get there after a solid debut.

Kyle Van Noy was everywhere on defense in his first game back with the Patriots. He had a 10-yard sack of Tua Tagovailoa in the first quarter that forced a Miami punt. He deflected a pass at the line that wiped out a pass interference call on J.C. Jackson. He was in Tua’s face on another third-down play when the quarterback was nearly picked by Devin McCourty.

There was a lot of concern surrounding Mills heading into this one, and how he would fit into the No. 2 corner role during Stephon Gilmore’s absence.

Mills made a lot of folks feel a lot better about his chances with this break-up, saving a touchdown late in the first half.

Jalen Mills went all out for the PBU 🙅‍♂️ @greengoblin #ForeverNE

The defense did more than enough to win the game — despite giving up a handful of chunk plays. And when the Patriots defense is feeling it, chances are they’re going to come up with a game-changing play. That came from Jonathan Jones in the fourth quarter.

The veteran corner came up with a huge interception to give the Patriots the ball at midfield. Adrian Phillips (who had a spectacular game) and Matt Judon (also solid during his New England debut) were giving chase to Tua, forcing the QB to make a bad throw downfield. The ball bounced around a few guys before Jones came down for it, giving the team a chance to steal the W.

That, of course, didn’t happen. But the defensive overall was incredibly solid on Sunday.

Jonnu Smith and Hunter Henry were both solid in their New England debuts. Smith caught five passes for 42 yards and Henry had three receptions for 31 yards. The duo caught all eight passes that went their way, and should become even bigger threats in the offense as they get acclimated to the system.

After Jones made his epic, potentially game-changing interception in the fourth quarter, the Patriots offense got all the way down to the Miami 9-yard line. But that was as close as they’d get to the end zone, because Damien Harris coughed up the ball and Miami recovered.

“Tough play. I have to do a better job holding onto the ball in a critical situation like that,” Harris said after the loss. “It’s a long season and I’m not going to let this mistake define me.”

It was a disappointing end to an otherwise strong day from Harris, who picked up 100 yards on the ground. But that fumble was New England’s fourth on the afternoon and the second that the team lost. Rookie running back Rhamondre Stevenson also coughed one up on New England’s second offensive possession.

Patriots running backs are going to be carrying footballs around all week.

The Pats were hit with eight flags during this one, which cost the team 84 yards. That’s kind of a big deal for a team that doesn’t have a huge margin of error.

Harris had a great 13-yard run down to the Miami 1-yard line early in the second quarter, but it was wiped away by a holding call on Isaiah Wynn. It set up a second-and-20, and the Patriots ended up settling for a field goal a few plays later.

A blindside block by Shaq Mason late in the third quarter negated a 17-yard pickup by Kendrick Bourne, right after an unsportsmanlike conduct flag on Matt Judon cost the Patriots 15 yards on a punt return.

The Patriots were also hit with a few pre-snap penalties, which never sit well with Belichick. There are some rough film sessions ahead this week in Foxboro.

The Patriots are much better against the run this season, but they didn’t show that on Miami’s first drive, with Tua taking it in untouched from three yards out for the game’s first touchdown.

On the first play of the drive, Tua went short to Jaylen Waddle, who turned that connection into a 17-yard pickup as he gashed the middle of the New England defense. Salvon Ahmed took a short Tua pass later in the drive and turned that one into an 18-yard pickup. Myles Gaskin rushed for 28 yards on his five carries on the drive.

Miami only faced one third down on the opening drive — a 15-yard run by Gaskin. Allowing three big chunk plays on the first defensive stand of the season was not the way the Patriots wanted to start things off in 2021.

After a promising start, New England’s first offensive drive stalled when Jones fumbled on a first down play. Jones felt pressure in the pocket, and turned around and threw the ball into the ground for some reason. It was ruled a sack, a fumble and a nine-yard loss to set up a second-and-23. A few plays later, the Patriots were forced to punt away.

The monster right tackle went down with a calf injury after New England’s first drive and did not return. Miami took advantage of not having to deal with the big fella the rest of the afternoon.

Jones was under duress for much of his debut. He was only sacked once, but he was hit a total of nine times. 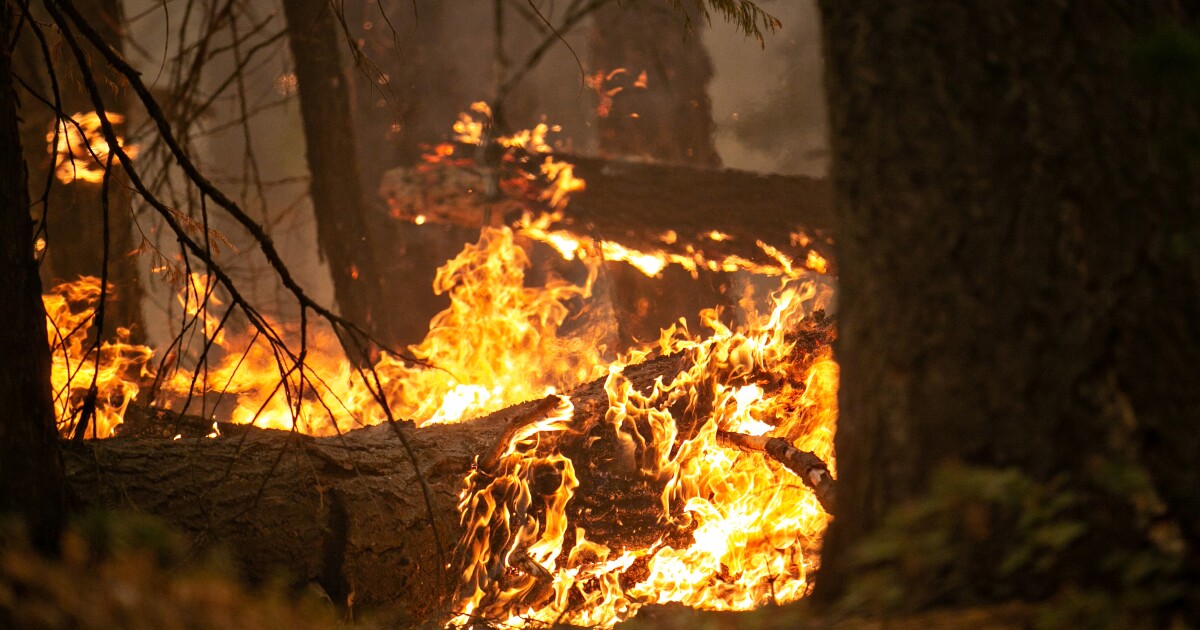 SOUTH LAKE TAHOE, Calif. —  The Caldor fire is closing in …