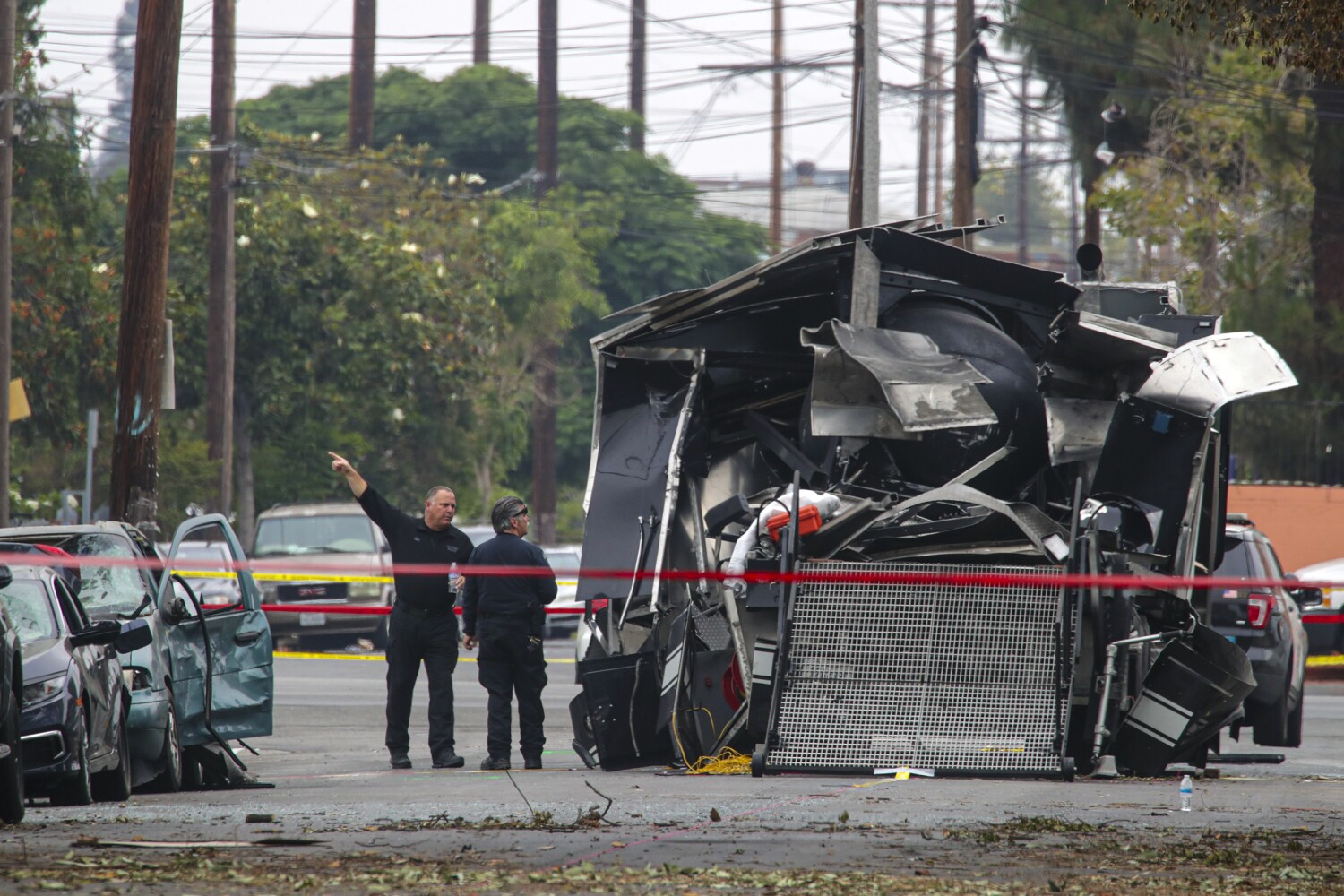 Los Angeles police badly miscalculated the amount of fireworks they placed into a containment vessel before detonating them and causing a massive explosion that destroyed part of a South L.A. neighborhood in June, according to a new report from federal investigators.

“It was caused by overloading the [total containment vessel] with more explosives than the TCV was designed for,” said Assistant Special Agent in Charge Michael Hoffman, of the U.S. Bureau of Alcohol, Tobacco, Firearms and Explosives, during a closed-door meeting with local residents Monday night. “That’s what caused the failure.”

Hoffman said the ATF had ruled out other causes for the explosion, such as degradation of the containment vessel over time or a malfunctioning of its door, and determined the overloading of the vessel was the sole cause for the blast that destroyed dozens of homes, cars and businesses.

Hoffman said the LAPD’s containment vehicle was designed to handle repeated detonations of 19 pounds of TNT equivalent at a time, or a single detonation of 33 pounds of explosives before being returned to its manufacturer for analysis.

However, investigators determined that LAPD bomb squad technicians accidentally loaded and detonated 39.8 pounds of explosives in the containment vehicle on the day of the explosion, Hoffman said.

He said the agency was “absolutely certain” of its conclusions.

LAPD Chief Michel Moore, who also spoke at the closed-door meeting, said the fireworks that were placed in the containment vessel were not weighed with a scale but eyeballed by the technicians working the scene.

He said several members of the bomb squad have been removed from the team and will not be returning to it.

The June 30 explosion in the 700 block of East 27th Street, just days before the Fourth of July holiday, injured 17 people — including 10 LAPD officers, one ATF agent and six civilians — and damaged or destroyed 13 businesses, 22 residential properties and 37 vehicles, police have said.

The explosion displaced dozens of people, forcing them to move into hotel rooms paid for by the city as officials worked to clean up the mess. Many residents remain displaced, with some homes on the block deemed uninhabitable. Others have continued living in damaged homes.

Two elderly residents of the block who were among the displaced have since died. Officials have attributed their deaths to illness and natural causes, though family members and activists have said the explosion caused significant stress and was clearly a contributing factor in their deaths.

Arturo Ceja III, a 26-year-old resident of the block, pleaded guilty in federal court last month to unlicensed transport of explosives from Nevada to California. Federal authorities said Ceja had been storing about 16 tons of fireworks in the backyard of his family’s house — which the LAPD discovered after receiving a tip.

Moore on Monday night said the LAPD “pulled apart each of the steps” of the operation to safely remove the fireworks from the area, and reviewed the process that officers undertook to secure the area before the detonation.

Moore said that procedures were followed before the detonation and that evacuations were carried out. Residents have rejected this claim, saying they were given little warning or mixed messages about the need to leave the area before the explosion blew out windows for blocks and caused much heavier damage closer to the blast.

Moore said the decision to use the total containment vessel on the residential block was also consistent with protocol.

Moore said the problem occurred when the material was loaded into the vessel and LAPD personnel estimated the weight of the explosives instead of physically weighing the material.

Moore said an evaluation after the blast found that the LAPD’s “protocols, our training, our standards were not strong enough and need to be improved, and we’re committed to doing just that.”

Moore said the LAPD will no longer use a total containment vessel to detonate fireworks in residential locations. It will also require that all explosives set for detonation be physically weighed first, and that “checks and balances” be put in place to ensure those calculations are correct.

Moore declined to provide the names of officers involved in the errors that led to the blast, saying the blame rested with him. However, he also said that an investigation into the actions of individual officers was still underway.

Moore offered his condolences to those who have been affected by the blast.

“To every parent, to every son or daughter, to every child, to every business owner, to anyone who has been impacted by this terrible accident, I am sorry,” Moore told the crowd. “I am sorry that you are going through this.”

Moore said members of the media and community activists were barred from attending the meeting because he didn’t want protesters and outsiders to disrupt it or make it hard for residents to get the information the police and ATF agents were there to provide.

Police officers checked people’s driver’s licenses at the doors of the All Peoples Community Center to see if they lived on the block, riling activists and some of the residents who wanted media members and activists to be allowed in.

After the meeting, one resident, Juana Oceguera, said she felt “worse than before.”

She said she had documents and laptops and other items stolen from her apartment, which she hasn’t returned to since the blast. She’s still in a hotel.

“I don’t know what to do,” she said. “Supposedly the police were taking care of our street.”

She said police were “protecting the people responsible” by not releasing the names of the officers who made the miscalculations. She said she was frustrated about not being home because of the “absurd” actions of the officers involved.

In a statement Monday night, City Councilman Curren Price, who represents the area, said the ATF report confirmed the LAPD was negligent and showed little regard for the local community.

“As trained professionals in one of the largest police departments in America, I still cannot fathom how the LAPD thought it was acceptable to merely eyeball unstable explosives in the middle of a densely populated neighborhood,” Price said. BOSTON (CBS) — The Celtics have made it sound like …