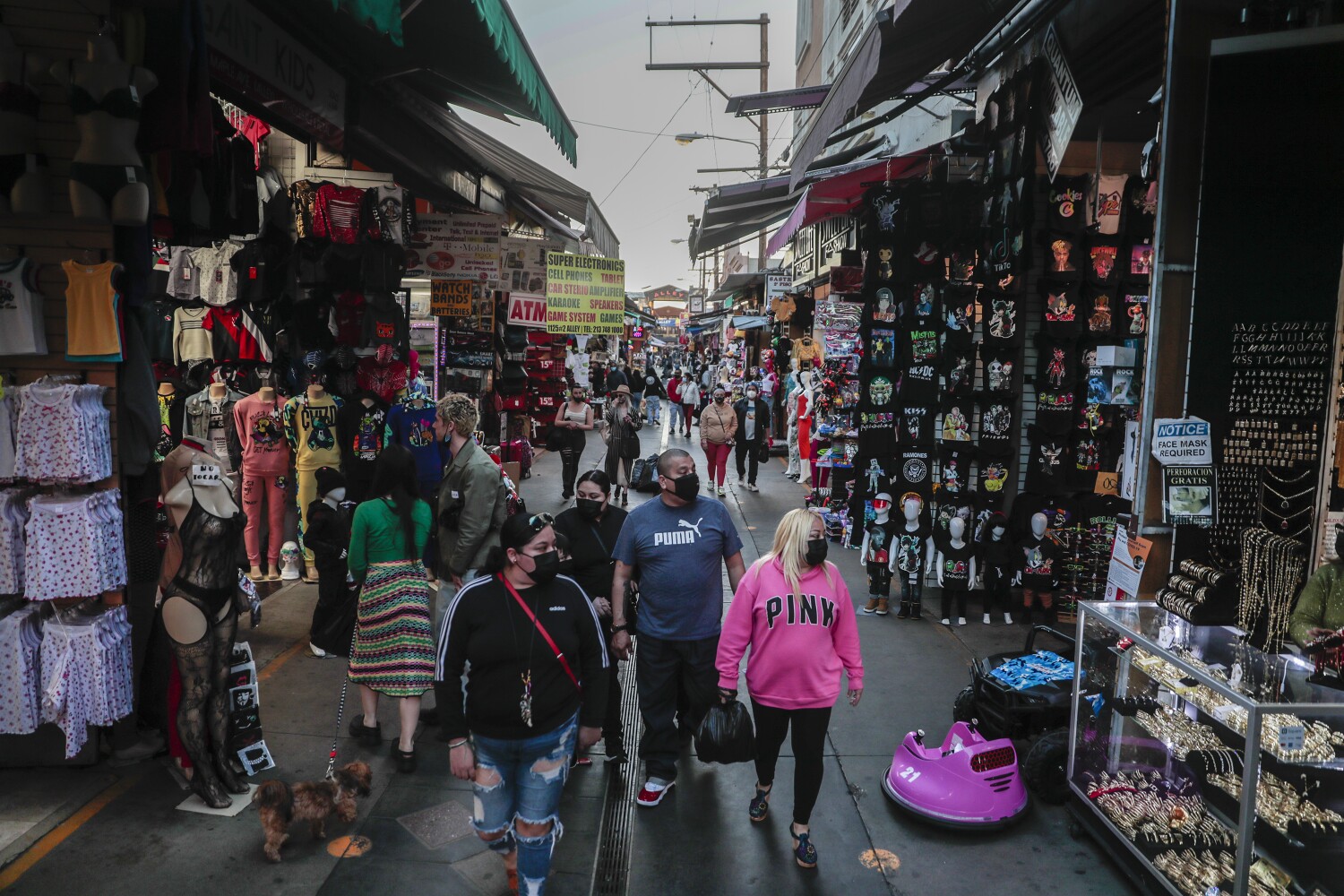 At a news briefing Monday, L.A. County Public Health Director Barbara Ferrer paused for a moment of silence in recognition of the pandemic’s staggering death toll before launching into the latest data.

“I do want to start today’s update recognizing the heartbreaking loss of life from this deadly virus,” Ferrer said. “Half a million people have passed away across our nation, and here in L.A. County, we are approaching the terrible milestone of 20,000 deaths. Let us remember and honor all those who have passed.”

With 21 new deaths reported Monday — a number that is likely low due to reporting delays from the weekend — the county reached 19,904 deaths from COVID-19 since the beginning of the pandemic.

Although the county’s rate of positive test results exceeded 20% around New Year’s Day, that rate has fallen below 5%, Ferrer said.

The effective transmission rate also has dropped to 0.76 from 0.81 a week ago, meaning for every 100 infected people in L.A. County, the virus on average is being transmitted to 76 people, indicating that the number of people being infected is shrinking.

“We continue to make progress in reducing the average daily number of new cases of COVID-19,” Ferrer said.

Statewide, numbers are improving as well. California’s rate of positive test results, which peaked at 14.3% on Jan. 7, has fallen to 3.1%, a figure not seen since Nov. 1, according to a Times analysis. The state is now recording about 7,000 new coronavirus cases a day, down from 45,000 a day just six weeks ago.

The number of people in the hospital in L.A. County with COVID-19 is about the same as around Thanksgiving, after the surge had begun. The county’s publicly run hospitals were at 72% occupancy as of Monday, county officials said in an email to The Times on Tuesday.

At the county’s publicly run hospitals, there are currently about 150 COVID-19 patients, 40% of whom are in the ICU. “We are still seeing a large number of patients with very long ICU stays,” Ghaly told the Board of Supervisors on Tuesday.

The effects of the surge are still being felt throughout the county’s public healthcare system.

Out of five county outpatient clinics that closed during the surge to free up staff to help hospitals, only one has reopened. And although hundreds of nurses who had been on loan to hospitals during the surge have moved back to their normal jobs, some are still working at the hospitals. Still, all U.S. Department of Defense staff members who had been assisting the county-run hospitals have departed.

Also, the county is actively rescheduling non-urgent surgeries and procedures postponed during the surge.

Both Ghaly and Ferrer hedged their optimism, noting that this week could bring increases in cases resulting from gatherings over Super Bowl weekend.

“An increase in the behaviors that facilitate transmission can still very easily lead to an uptick in the number of hospitalized patients in just a couple of weeks,” Ghaly said. “This can happen very quickly, and as we all know, it’s very difficult to then turn things around and start to force those numbers back down.”

Contributing to the improving numbers is the ongoing rollout of the COVID-19 vaccine. As of Monday, nearly 1,771,000 doses had been administered across L.A. County, according to the county Public Health Department. Of those vaccinated, just over 513,500 people have received second doses.

Currently, only healthcare workers, residents and staff of nursing and long-term-care facilities, and Angelenos 65 and older are eligible for the vaccine. Yet even as supply issues plague statewide inoculation efforts, three additional sectors will become eligible to receive vaccines March 1: education and childcare workers; food and agriculture workers; and law enforcement personnel and other emergency responders. Together, they make up about 1.3 million people in L.A. County.

The eligibility pool will deepen further on March 15, when people ages 16 to 64 who are disabled or at high risk for morbidity and mortality from COVID-19 will be able to receive vaccinations in the state.

More than 90% of vaccines the county receives are “in the arms of people who are eligible” within five days, Ferrer said, but fluctuating supply levels are creating challenges. Though there were 500,000 available appointment slots this week, the county only had enough doses for 209,000 people.

“Across all sectors, there’s much more capacity to vaccinate,” Ferrer said, “but we simply do not have the supply of vaccine to offer more appointments.”

Ferrer addressed the inequities and apologized to communities that had had limited access to vaccines.

“We have and do extend our apologies,” she said. “It’s not about talk at this point, though. It’s really about shifting the ability of us to make sure that we’re improving access in those communities.”

Both county and state officials have reaffirmed their plans to address inequity issues and reach people in hard-hit areas through community outreach and mobile vaccination efforts.

And while numbers continue to improve, health officials are also bracing for the rise of more transmissible variants of the virus, including a California strain that looks increasingly dangerous.

As a doctor treating gay men in New York City, …