Home
Local
How will L.A. fill the leadership void after Eli Broad? 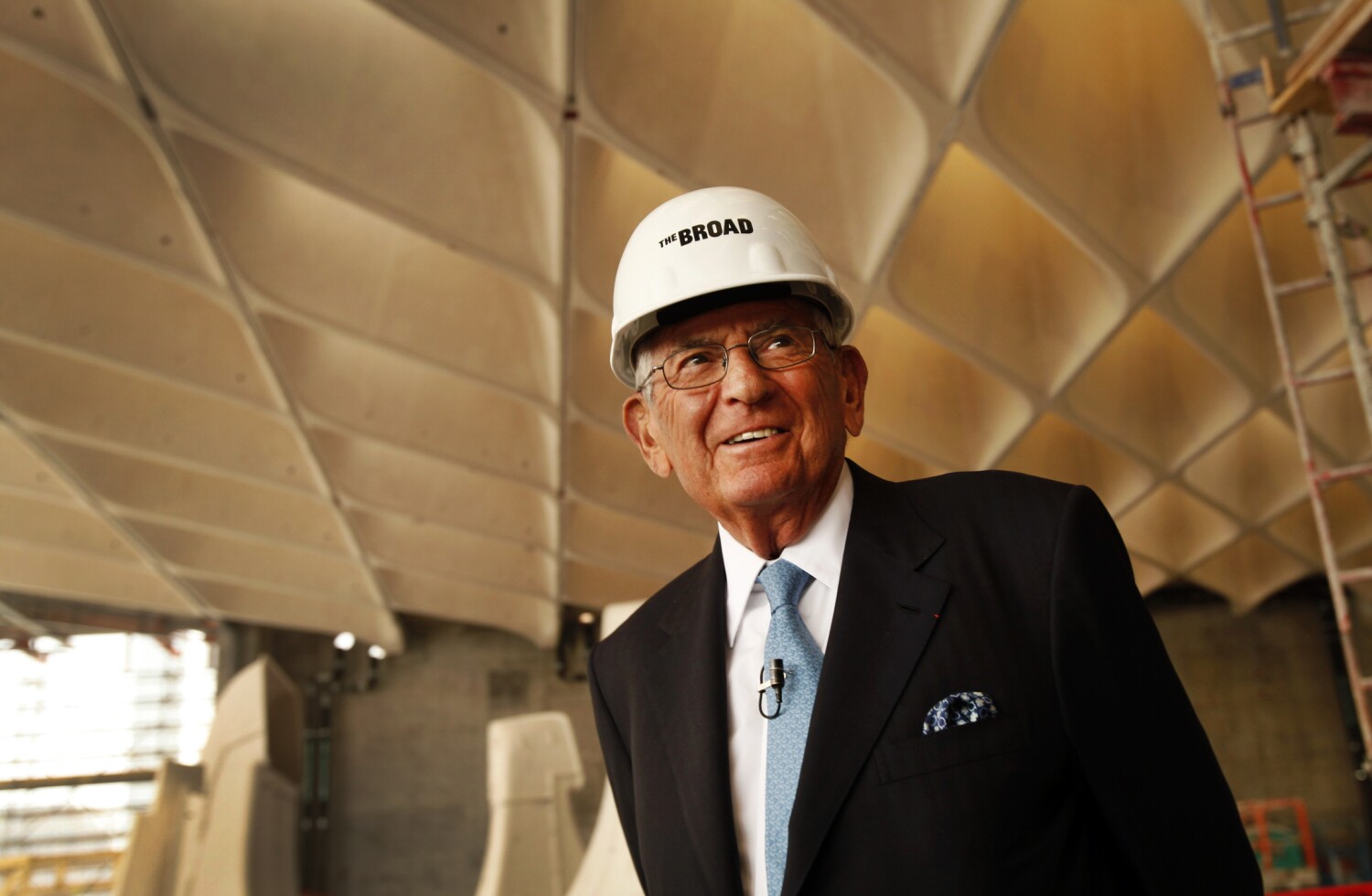 When Eli Broad imagined the future of Los Angeles, he saw a thriving metropolis whose cultural and artistic resources matched the tastes, appetites and ambitions of its residents. As one of its wealthiest residents, he was able to shape and finance his personal dream of what Los Angeles should be.

Grand Avenue, on the crest of the city’s former Bunker Hill, was perhaps his signature achievement. He helped pay for the Museum of Contemporary Art. He similarly financed the Walt Disney Concert Hall, and he built the Broad museum. Speaking at its opening in 2015, he declared Grand Avenue “the cultural center” of the city that “has become the contemporary-art capital of the world.”

But even as he was crafting and executing his vision, the city was changing around him. Over the decades, a vast economic divide has opened up, polarizing communities and laying bare inequities in housing, income and opportunity.

Broad’s death on Friday at age 87 leaves a conspicuous void in philanthropy and leadership. But many believe the civic leaders of Los Angeles’ future need to be different in order to meet the vast challenges facing the city — one focused not just on building but fixing and healing.

“Los Angeles will never have one single kingmaker or leader who will take charge of all the challenges we’re confronting,” said Miguel Santana, a longtime top official in both city and county government who now heads the Weingart Foundation. “That person will have to be inclusive and representative to solve our problems.”

Broad represented a long line of wealthy business leaders who used their power to exercise their personal vision. But in a city as diverse and complex as L.A., some say it’s hard to see another person like him filling that exact role.

“Eli was of a generation where an individual could have a singular and outsized effect on the city, but in many ways, he and some others were so successful in expanding what was happening in the city, that the city demands a different type of involvement now,” said architect Michael Maltzan.

Maltzan, who worked with architect Frank Gehry on Disney Hall, sees Los Angeles as a city that “has grown in its presence, size, stature and complexity” so much that civic-minded individuals “need to come from many different areas and sectors.”

As much as Gloria Molina, a former City Council member and county supervisor, admired his leadership and directness, she recognized its limitations. Looking back on his campaign to revitalize Grand Avenue, she recalls the compromises that took place as his vision for this public space collided with what she believed were the needs of the city.

Initially Broad had wanted Grand Park to be developed after the completion of the Grand Avenue Project. If he had had his way, Molina said, we would not have enjoyed the last nine years of this green space in downtown Los Angeles.

“We are fortunate to have a visionary like him,” she said, “and I am hoping that a new generation of philanthropists will be more inclusive of an overall vision. It is not enough to say, ‘we’re art philanthropists and support ballet or opera,’ without looking at what is happening to the rest of community.”

What made Broad unique, Santana said, was the understanding that philanthropy can’t operate in isolation. Despite the tensions over the development of Grand Avenue, Broad understood that he needed to work with government agencies to succeed.

This collaboration, Santana said, has become even greater as the city grows more complex and diverse.

“Los Angeles will never have one single kingmaker or leader who will take charge of all the challenges we’re confronting,” he said. “That person will have to be inclusive and representative to solve our problems.”

Zev Yaroslavsky, who was on the Board of Supervisors when Broad was negotiating over the development of Grand Avenue, said he believes that Broad’s style of leadership is “in the rearview mirror.”

“The days when one person could convene the agents of wealth and commerce and business to mobilize for a large civic project are over,” said Yaroslavsky, now with UCLA’s Luskin School of Public Affairs. “That has changed in L.A. We’ve [got] different businesses and demography. The city is more diverse and less concentrated. It’s not that civic projects won’t be done. It’s that they will be done in a different way.”

When Broad arrived in Los Angeles in 1963, Los Angeles was the self-made city for the self-made man, as its promoters might have claimed. Following World War II, the region was booming economically but lacked focus. A civic identity was slowly being shaped by a coterie of businessmen, university presidents and movie moguls.

They met at Perino’s on Wilshire Boulevard for lunch and called themselves the Committee of 25. When they wanted to modernize the Police Department, they backed William Parker as the new police chief. When they wanted a baseball team, they spoke to Walter O’Malley. Dorothy Buffum Chandler was also a member of this club, soon raising the money for the Music Center.

By the time Broad began his “venture philanthropy” decades later, he was largely alone in the field, bringing not just his money but an impatience with the status quo.

“Eli single-handedly moved mountains with the force of his personality, and we frankly haven’t seen that from anyone else,” said Los Angeles City Councilman Kevin de León. “The next generation of philanthropists are going to inherit a much more diverse city with even larger needs, especially after the pandemic.”

But De León also recognizes that the need for philanthropy reflects the absence of government policies that “make the right investments that are inclusive of all Angelenos.”

Broad’s death comes at a time when corporate and civic leadership in the city is faltering in the midst of its greatest crisis: homelessness and the lack of affordable housing.

“What Los Angeles will miss as much as his generosity, is his leadership,” said investor and philanthropist Nicolas Berggruen. “What was so valuable were his insights, his focus and his ability to push things forward, and he got others to do it with him. He was good at getting people to be practical and constructive.”

The question going forward, Berggruen said, is whether those who have been successful in Los Angeles will be as civically minded as Broad. “We have more talent today than ever,” he said, “but will these people share their success?”

Broad belonged to a generation of Angelenos whose fortunes rose with the development of Southern California, and with the exception of Donald Bren in Orange County, he was the last of its great benefactors.

“Eli was very rooted in L.A.,” said Joel Kotkin, author and presidential fellow in urban futures at Chapman University. “The problem today is that basically the leadership class of L.A., who are its big employers, have almost disappeared. We have people who are successful but don’t identify with the city per se.”

Broad’s commitment to Los Angeles also made him unique. He understood that his success was attributable to the growth of L.A., where his home-building firm, Kaufman & Broad, had its headquarters and soon became the biggest independent builder of homes in the country.

Years later, as the limits of this so-called meritocracy become more apparent, Los Angeles is trying to come to terms with a past that excluded many people from the opportunities that Broad believed were available to all. With his death, Los Angeles must turn to a new generation of philanthropists and address the myths that made claim for the city’s exceptionalism.

Architect Maltzan traces the arc of Broad’s career — from building the suburbs to supporting the arts — and views this evolution as appropriate, even poetic.

“That is the extraordinary thing,” Maltzan said. “The kind of city that Eli was working to help make — and the kind of future that he was helping to make — led to a city where the model of influence and philanthropy needed to change and evolve.

“If we were at a point where the city continued to depend on one or two individuals for its future, then I would say that Eli had failed because that is unsustainable. But the city has grown more complex, larger than anyone individual. That, for me, is a mark of success.”

On Tuesday night, the cycle began again: Instagram lit up …