SAN FRANCISCO (KPIX-TV) — San Francisco goes to great lengths to preserve its historic Victorian homes and, on Sunday, one of them took a journey. While it wasn’t a great length, it was great entertainment. The Englander House is — or was — a 140-year-old Victorian mansion located at 807 Franklin Street.

Neighbor Sebastian Luke said he’s used to seeing it there. “I wake up every morning to this house and then I say goodnight to the house,” he said sadly.

Now Luke is saying goodbye. The property owner wants to build apartments on the site so the home was moved to a location about a half-mile away on Fulton Street. “You got the money, you got the experts to do it and here we go, you know?” said San Francisco resident Chris Dumlao.

Another onlooker, Challiss Mosher, thought there was something surreal about seeing a two-story house making a right turn onto a street. “I keep looking for the Wicked Witch of the East. She’s supposed to be under it but she’s not,” Mosher said. “It’s just bizarre, really.”

The move had been carefully planned but, even so, problems cropped up immediately. The house snagged a light pole banner which had to be cut away. A block down the street, trees had to be trimmed before the procession could resume. A turn onto Golden Gate Avenue was a breathtakingly-tight squeeze between a street light and a no-right-turn sign.

The spectacle continued and the crowd grew as police warned people to get out of the street because “a house is coming.”

The turn onto Laguna Street looked impossible. The 80-foot-long home seemed stuck until a city worker arrived to remove a street sign.  “It’s the small obstacles that make it so dramatic. Getting between the two light poles, taking a half hour to turn one corner, trimming the trees, removing the signs. It’s the little things. It’s all in the details,” said Patrick Carney.

Carney knows about dramatic details. He oversees the unfurling of the giant pink triangle on Twin Peaks for Pride Week. Even he was blown away by what he saw Sunday. “Only in San Francisco,” he said. “Where else can you see a beautiful, ornate Victorian turning a corner in the middle of all these other buildings? It’s such a tight squeeze.”

After about four hours, the house made a final turn onto Fulton Street. Once again, problems with one of the sets of wheels caused a delay. After jacking the house up and repositioning the dolly, the building was finally clear, pulling into its new location next to a former mortuary where, together, they will become 17 new housing units for the city.

The move cost the owner more than $400,000. Moving Victorians was common during the redevelopment of the 1960s but it became more difficult over time so Englander House is the first to be moved since 1974.

Henry Karnilowicz is a consultant hired to obtain all the permits for the move. He said SFMTA alone required 13 permits at a cost of $50,000. So, does he question whether it was worth it? “Well, yes I do. I really, really do,” he said, “but, at the end of the day, it’s a historic building, you know? And that’s what San Francisco’s about — the history of the city.”

The city by the bay does love its history and, even more than that, it loves a great show.

The move — according to the San Francisco Historical Society the first in city in nearly 50 years — created a buzz on social media a flurry of postings.

Simon Willison posted a photo of the large crowd that had gathered.

So this is happening this morning pic.twitter.com/IKevgW15N0

Dozens of videos were posted of the nearly 7-block move.

With a crowd of onlookers, gawkers and nervous engineers in tow, a 139-year-old Victorian home was moved a quarter mile the wrong way down a hilly San Francisco street early Sunday.

toddenfreude joked about the recent exodus of residents during the COVID-19 shutdown — “The San Francisco mass exodus is real. Even the houses are fleeing!”

The San Francisco mass exodus is real. Even the houses are fleeing! https://t.co/5zQDOwM5N5

Parlay Brand posted: “So, I’m having #BaconAndBlunts on this #Soulful Sunday, watching people play hoops and soccer, and this Victorian house comes driving down the street. Only in San Francisco #Frisco”

So, I’m having #BaconAndBlunts on this #Soulful Sunday, watching people play hoops and soccer, and this Victorian house comes driving down the street. Only in San Francisco #Frisco pic.twitter.com/UxtTwV6Ft1

Roweena D’Souza posted an image of a delicate cornering maneuver and posted: “Nothing to see here except a whole victorian house trying to make a left turn #SanFrancisco”

Nothing to see here except a whole victorian house trying to make a left turn #SanFrancisco pic.twitter.com/eNIT5nQsHp

MORE NEWS: Milpitas Man Gets Prison For Conspiring To Ship 500 Pounds Of Marijuana To Kansas City 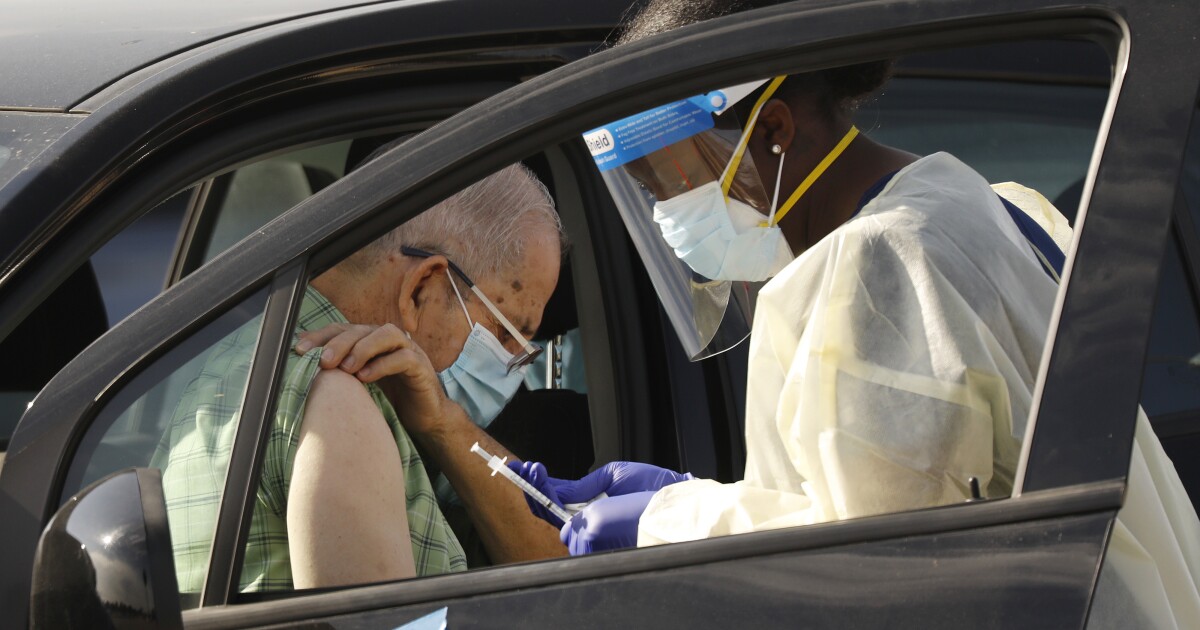 Vaccinating Californians 65 and over could take until June to …

Key moderate Republicans in the Senate dismissed quick action on …