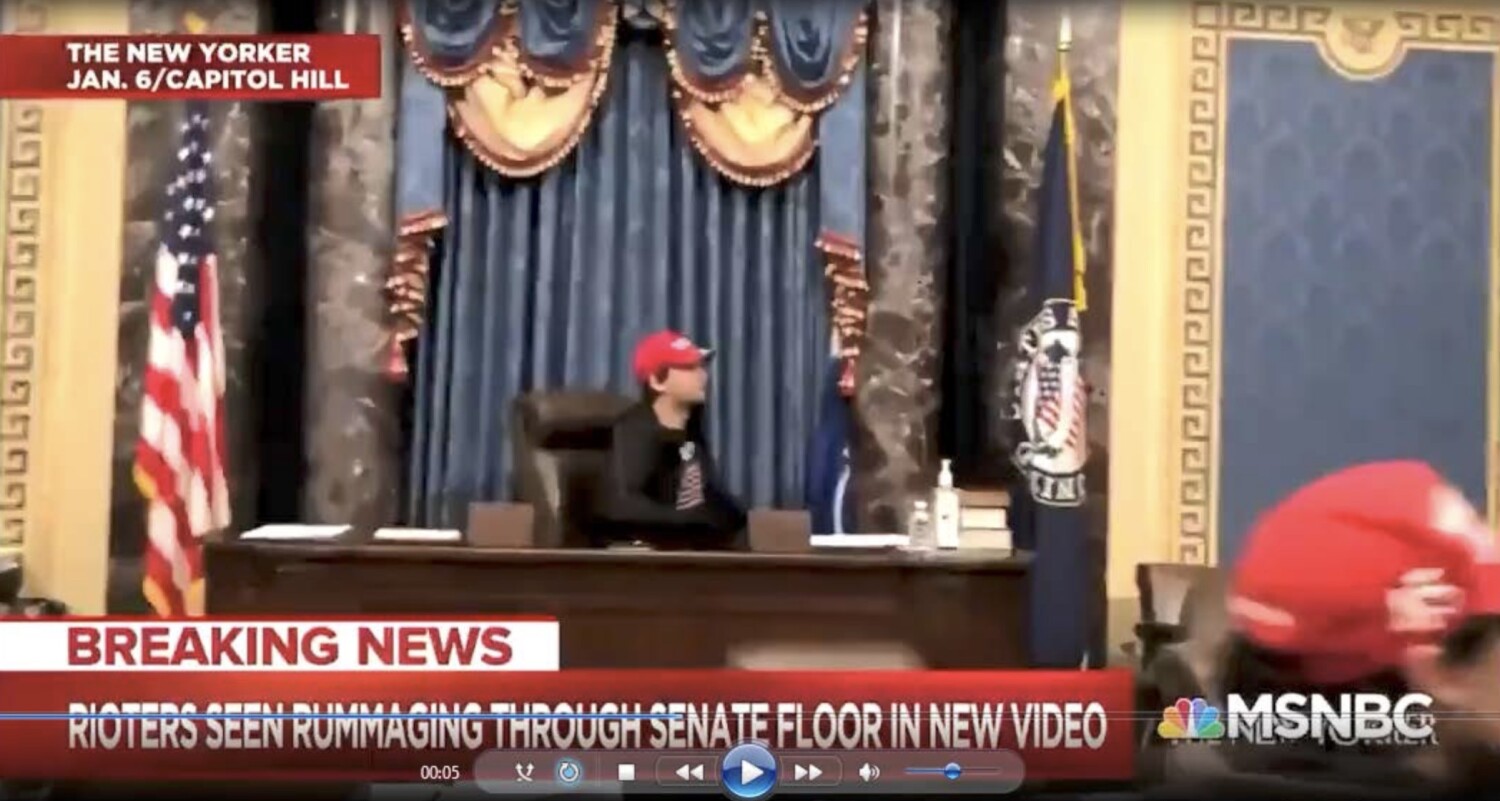 In March 2020, UCLA student Matthew Richard went on Twitter and called for the university to investigate and expel fellow undergrad Christian Secor.

He posted a thread with 21 recent tweets from the account of Secor, who founded America First Bruins, a far-right student group.

“Anyone else cop the Hitler sneakers?” one tweet read. “Can ICE just cough on illegals or something?” read another.

Outrage followed. Students complained to administrators. More than 30,000 people liked a Twitter post by one student who asked, “Ya’ll think UCLA can expel someone for xenophobia and wishing death upon undocumented ppl during a pandemic?”

Secor was arrested Tuesday and charged with federal crimes for his alleged role in the U.S. Capitol riot. But long before he was identified as having sat in the chair Vice President Mike Pence had vacated, the 22-year-old had stirred up tensions over free speech at UCLA.

“In our opinion, this was not some random action that occurred,” said Naomi Riley, a senior and president of UCLA’s Undergraduate Students Assn. Council. “Him showing up at the Capitol was not out of the ordinary. It was very in line with what has been going on within that organization.”

Secor’s Twitter feed offers a window into the increasingly explosive topic of free speech rights and extremist speech on American college campuses. Controversial speech is not foreign to UCLA. The university made national headlines in 2019 when a campus talk by Donald Trump Jr. hosted by Turning Point USA, a nonprofit conservative youth organization, was disrupted by supporters of Nicholas Fuentes, a far-right influencer who has attacked the national group’s founder for being a “fake conservative.”

The 1st Amendment gives broad free speech protections, safeguarding rhetoric that is hateful and offensive. Supreme Court decisions have carved out exceptions, such as for incitement of imminent illegal activity or true threats.

“UCLA, being a government institution, is bound by the requirements of the 1st Amendment,” said Brian Levin, director of the Center for the Study of Hate and Extremism at Cal State San Bernardino. “One of the benefits of a free society is having the government not censor for the most part what we can hear.”

That protection extended to Secor.

Secor, a Costa Mesa resident, was a follower of Fuentes, host of the “America First” podcast who practices “white nationalism under a mainstream gift wrap,” according to Levin. An affidavit by FBI Special Agent Benjamin Elliott describes Secor carrying a large, blue “America First” flag in the Capitol.

The now-defunct America First Bruins Twitter account had as its background a banner stating, “communists aren’t people.” Secor’s Twitter account had called fascism “epic” and “valorizes the 2017 Charlottesville tiki torch march” in Virginia, which featured an anti-Semitic chant, according to the affidavit.

“All this speech is fully protected, and of course, extremist speech on the left is fully protected,” said Eugene Volokh, a professor at UCLA’s law school who chairs the Committee on Academic Freedom of the university’s academic senate.

Volokh outlined some exceptions. He said that while, for example, speech supporting the firebombing of police cars and stations would be protected, standing in front of a crowd and saying, “Let’s go and burn this down,” could be considered inciting imminent lawless conduct.

In an interview published on YouTube last May with a conservative podcast host, Secor discussed the America First Bruins and shared his own views on free speech.

“I don’t support complete free speech, I don’t think that communism should be legal,” he said, going on to say that anarchists and communists “are the proponents of hate speech.”

An attorney who represented Secor at a hearing in Orange County where a judge ordered Secor held without bail declined to comment.

America First Bruins is not currently a registered student organization at UCLA. A screenshot provided to The Times of its defunct Twitter account shows that the group announced its dissolution sometime during the pandemic.

Secor had once also belonged to the Bruin Republicans. In February 2020, he represented the group in a debate against the Bruin Democrats organized by the non-partisan Bruin Political Union.

In the crowd was Richard, then a junior who was growing increasingly worried that his campus was giving platforms to people with extremist views, upset that the Bruin Republicans had invited conservative figure Michelle Malkin to speak several months earlier.

He said that at the debate, Secor used the term “illegals” to describe undocumented students and generalized immigrants as people who were stealing American jobs.

“I thought this is extremely dangerous what this student is promoting,” said Richard, who belongs to several leftist student groups. “I was scared. We had a lot of events and we had a lot of agitators on our events on campus.”

In late March, America First Bruins and the Bruin Republicans endorsed an open letter, along with conservative groups at other universities, asking then-President Trump to institute an indefinite moratorium on immigration to the U.S. due to the pandemic, and to rededicate his efforts on the U.S.-Mexico border wall.

For Grayson Peters, a senior, the letter called attention to the fact that America First was “apparently making inroads with mainstream campus conservativism.”

Peters published an op-ed in Ha’Am, a university Jewish media outlet, that began bluntly: “Fascists are organizing at UCLA.” He urged students, faculty and the university to “condemn America First Bruins and other culpable organizations like the Bruin Republicans who legitimized them.”

A statement from a handful of student groups, including Bruins for Bernie and the Bruin Democrats, asked for the temporary suspension or dissolution of university services to both conservative organizations, stating that their letter had been “rooted in xenophobia.” The Bruin Political Union said it would not engage with the Bruin Republicans “until it is determined that leadership has been reclaimed by American conservatives, not neo-fascists.”

The Bruin Republicans said it was being wrongfully smeared. In response to Peters’ piece, it wrote that America First Bruins is a separate organization and that “the individual in question does not speak for us.” It said that “the attempt to apply blanket associations and therefore establish guilt by such disingenuous association are clearly unethical.”

“Free speech includes controversial and offensive ideas,” it wrote. “While our organization wishes for rhetoric that is professional and civil, we do not make judgment calls on lawful speech.”

Without naming Secor, the Bruin Republicans said last Wednesday that it expelled someone last year for “inappropriate behavior” who was later arrested in connection with the Capitol riot. They did not respond to an interview request.

Peters also took his concerns about Secor to Mike Cohn, who directed the office that advises UCLA’s campus organizations. He said Cohn told him that nothing he had seen had risen to something UCLA could act on, since there had been no directly violent actions or threats.

Cohn did not respond to a request for an interview. When The Times asked UCLA how it had responded to the complaints it received from students, spokesman Bill Kisliuk said student conduct complaints and proceedings are legally protected from disclosure.

Kisliuk did not respond when asked whether UCLA has taken or is considering disciplinary action against Secor. Some students say Secor’s arrest underscores how the school should have intervened last spring, even if only with counter-messaging to denounce his rhetoric.

Riley said Secor’s organization exemplifies “white supremacy that exists on campus,” noting that the messages on his Twitter account contradicted statements the chancellor has made in support of racial equity and diversity on campus.

“There are organizations on campus like America First that exist that I would say run contrary to UCLA’s values, that run contrary to the safety and well-being of our students and there has not been much action, at least publicly,” she said.

But Stephen Sands, president of the conservative and libertarian UCLA Federalist Society and a third-year law student, said the university was in a tough spot.

“If you do something about a student like this, what’s to stop other students who are not in that realm, not as extreme, from being lumped in with this guy?” said Sands. “Now the UCLA administration is in the business of drawing lines between what’s racist and what isn’t.”

Sands also questioned what intervening would have accomplished, wondering whether Secor might have only ended up feeling censored and would have sought another online forum more accepting of him.

“When people self-censor when it comes to expressing these kinds of views, you end up with never having a chance to debate them on an open forum with other people — that usually ends with people becoming more and more radical,” he said.

Vikram Gill, a junior, joined the Bruin Republicans his sophomore year, when Secor was a member. Gill, the son of immigrants, left the group because he disagreed with members’ hard stances toward immigration.

He said that he’s seen the consequences of limits on free speech in other countries, referencing China’s persecution of anti-communists, saying it can lean on either side of the political spectrum.

“I’d like to see, especially at a university, a place we can have a free exchange of ideas without anyone being harassed,” he said. “No matter how extreme those views are, to find the truth to many of the problems we have in society, we have to have these discussions openly.”

“What he’s tweeting is awful and disgusting,” he said of Secor. “What I’m thinking is just by silencing him doesn’t make him go away.”