With an endless stream of water bottles making numerous claims about technological innovations and insulating properties flowing into the market, it’s easy to get lost in all the options.

To determine which bottles are truly worth their price tag, we culled thousands of insulated water bottles down to 15 contenders after reading through reviews and browsing bestselling bottles across the internet. We then put them through a litany of tests to determine which is the absolute best. (For more on our testing process, scroll down.) After two months of testing and drinking a whole lotta water, we narrowed down our picks to two bottles that stood out from the rest.

The Yeti Rambler came out on top during our testing thanks to its stellar thermoregulation, amazing durability and fantastic chug cap that gives you a comfortable and quick drinking experience, while maintaining easy access to the superwide mouth.

The 21-ounce Healthy Human Stein was a surprise standout in our testing for its durability and effective thermoregulation. We didn’t love the lid, but you can add the optional Flip n’ Sip lid to make the drinking experience easier. Plus, it comes in a dizzying range of colors and three sizes to fit most tastes and needs.

While the Yeti Rambler is a bit on the pricier side, this water bottle is easily the best one we tested. Not only does it keep your drinks hot or cold for hours and hours, it’s solidly durable and has the best lid we’ve ever tested. Plus, the Rambler is customizable, available in 14 colors and five sizes (12-ounce, 18-ounce, 26-ounce, 36-ounce and 46-ounce) and it’s even dishwasher-safe.

While there are other bottles with great insulation that are reasonably durable, what pushes the Rambler past any other option on the market in our eyes is its standard-issue chug cap. This lid is made of two components: one that screws into the bottle and contains a spout, and another that twists on top of that to keep it protected. This two-tiered system means that whenever you want to take a swig of water, you can unscrew the top and chug away out of the spout. But when it’s time to refill your bottle with water and ice, you can take the whole contraption off, revealing the Yeti’s ultrawide mouth.

Other bottles we tested offered spout lids, but those often must be purchased separately, and none of them worked as seamlessly as the Rambler’s. The Rambler easily had the easiest drinking and filling experience out of all the bottles we tested thanks to this lid, which also retained little to no coffee flavor after our tests.

Best of all, we love that with the Rambler you don’t have to give up much on aesthetics to get top-notch performance. The Yeti bottle comes in a bunch of bold, stylish colors, including a light blue, an olive green and even an eye-catching pink. What’s more, starting at an extra $5 you can customize your bottle with all sorts of designs from plain text and monograms to state emblems and even logos you upload yourself.

The Yeti Rambler strikes the perfect balance between being a sturdy, insulated bottle that you can take on your roughest adventures while still looking good when it’s standing on your desk. Its customizability, ease of cleaning and ingenious chug cap are all reasons why no matter where you go, we think you’ll love having a Yeti Rambler at your side.

Hovering around $20 depending on which color you choose, this water bottle from Healthy Human was one of the top bottles we’ve tested. Its counterpart, the Healthy Human Curve, actually won our overall best spot last year. The Curve has had some issues with stock and is sometimes hard to find, but luckily the Stein is basically the same bottle as the Curve, just without the wavy design, which helped the bottle’s ergonomics but was a love-it-or-hate-it from the aesthetics side.

Along with the other bottles we tested this year, the Healthy Human did an excellent job at retaining temperature, especially over our shorter time intervals. Plus, during our first batch of testing it scored the highest out of all the bottles we tested for durability. After dropping it on its bottom as well as on its lid, the bottle barely showed signs of abuse, aside from some paint chipping on the bottom. It was one of the only contenders that didn’t turn into a wobbly vessel that could barely stand up. Coming in at 21 ounces, its success during the drop test may have been due to it being one of the lighter options, though the 26-ounce Yeti and other smaller bottles we tested didn’t perform as well when given the same treatment.

Where the Stein falls a tad short is its lid and mouth. The mouth isn’t nearly as big as the Rambler’s, so while filling up the bottle isn’t a chore, it’s definitely harder to get ice in as quickly as you can with the Yeti. The lid comes equipped with a carabiner and didn’t retain any bitterness after our coffee test; however, it’s a simple screw-on lid, so you drink directly from the bottle’s mouth instead of from a spout. You can, however, buy the Healthy Human Flip n’ Sip lid for an extra $14.99, which makes the drinking experience much better.

The Stein comes in 39 different color options and three sizes (16-ounce, 21-ounce and 32-ounce), with different availability depending on the size you choose. The selection isn’t limited to base colors like other bottles, and includes fun designs such as Mirage, Willow Oak and more. The Healthy Human Stein also comes in recyclable packaging, which is nice for those motivated to buy a reusable bottle to reduce plastic waste.

The Healthy Human Stein is a solid bottle that can keep your drinks hot or cold for as long as you need and won’t immediately dent or break when you drop it. Its lid isn’t the best, but its color selection and remarkably low price make it a bottle worth buying.

For our 2021 update, we retested a handful of top-performing water bottles, conducting another round of thermoregulation tests and adding a coffee test to see if the bottles or lids retained any bitterness after being washed.

Most bottles we tested had similar thermoregulation abilities, so we measured over a shorter period of time in this year’s tests to mimic everyday behavior. In our original testing, we measured hot water after 12 hours and cold water after 24, but this time we cut down the testing time to six hours for hot and 12 for cold since you (hopefully) won’t be drinking nine-hour-old coffee, and if you’re keeping up on your daily intake of water, it should definitely be time for a refill before the 24-hour mark.

Since the top-tier bottles have similar thermoregulation abilities, we paid more attention to things that will affect your experience on a day-to-day basis like durability and drinkability. Our two winners were the two most durable bottles we’ve ever tested, both coming out relatively unscathed after being dropped three times onto concrete.

We previously named the S’well bottle the best bottle for holding temperature, but after reconsidering how you’d use a water bottle in a day-to-day capacity, figured that whether a bottle can retain temperature better than others over 24 hours isn’t as important as durability and drinkability. Because of that, the S’well bottle dropped a bit in our rankings because it got extremely dented in our drop tests, and its small mouth means it’s a lot harder to clean, and filling it up with normal ice is basically impossible.

The wide-mouth version of Klean Kanteen solves the small-mouth problem on the standard Klean Kanteen bottle (which we also tested), and touts a large lid and a sturdier body. It performed amazingly in the original cold water test, coming in second behind the S’well, but didn’t do as well with hot water. If you’re not into the Yeti or the Healthy Human, the Klean Kanteen TKWide would be our next pick.

A Hydro Flask is a Hydro Flask. If you’re already set on buying one, you won’t be disappointed, but we just don’t think it’s the best option out there. It’s a great-looking bottle, but its performance wasn’t on par with many of the other options we tried. The biggest warning we’d give is not to drop the Wide Mouth version on its lid, because it popped right off and spilled water everywhere during our tests. The first time this happened we thought it could be a faulty lid, but after a second lid had the same problem, we decided to pin it on poor design.

The Standard performed equally if not better than the Wide. Plus, it’s smaller, which means less weight to carry around. You can’t pour ice in as fast, but the smaller opening also means it’s easier to drink from. Just be careful about drops. After our tests it got so damaged it lost its insulation abilities.

This Klean Kanteen had stellar performances with thermoregulation. The biggest downsides were the small mouth (with a weirdly tiny lid) and the fact that the body got so damaged it caused the insulation technology to fail.

This bottle performed quite well, especially with thermoregulation. The lid has a little magnet so it doesn’t hit you in the face while you drink. Its biggest downside: The cap broke off when we dropped it.

If you’re considering CamelBak, go with the Chute Mag over the Carry Cap. The lid on the Carry Cap has a big loop, which is nice to hold, but it snapped off pretty easily during the drops.

The Miir also did well in thermoregulation, outdoing both the Yeti and Sigg. However, it lost favor during the drop test, when the lid broke on the first drop. We didn’t test wide-mouth Miir bottles, only the standard. If you’re careful, Miir is a great option for a smaller, portable bottle.

This bottle performed well during the temperature tests, just about matching the Yeti Rambler. It’s a good-looking bottle featuring a lid with a locking mechanism and a built-in tea filter. Where it really fell apart was when we dropped it on that lid. It broke on the first drop. You can normally order replacement lids (though they’re out of stock now), but compared to the other bottles it just wasn’t sturdy enough.

This bottle is beautiful, scoring the highest in pure design. But it’s also expensive and scored the lowest in our testing, especially in thermoregulation, where it had the third-worst score after the Takeyas. The lid shattered on the drop test.

This bottle performed rather well in keeping water cold, but not nearly as well with hot water. The lid also fared really well during the drops, but the body got large dents on the bottom. What brought its score down were the little things: not as many sizes, lids or color options; it was on the heavier side; and it wasn’t as easy to carry.

The Takeya bottle underperformed with thermoregulation. The cap features a nifty little spout for fast drinking that unscrews to reveal a wide mouth, but it just wasn’t enough to overcome the poor insulation.

The Active is basically the same as the Takeya Standard, with a few nice improvements. Most notably is the rubber boot on the bottom, which is well worth the extra $5 if you want to buy a Takeya. While it didn’t completely eradicate dents, it made a big difference and prevented any paint chipping on the bottom.

“He needs to talk to us,” Josh Taylor, a spokesperson … 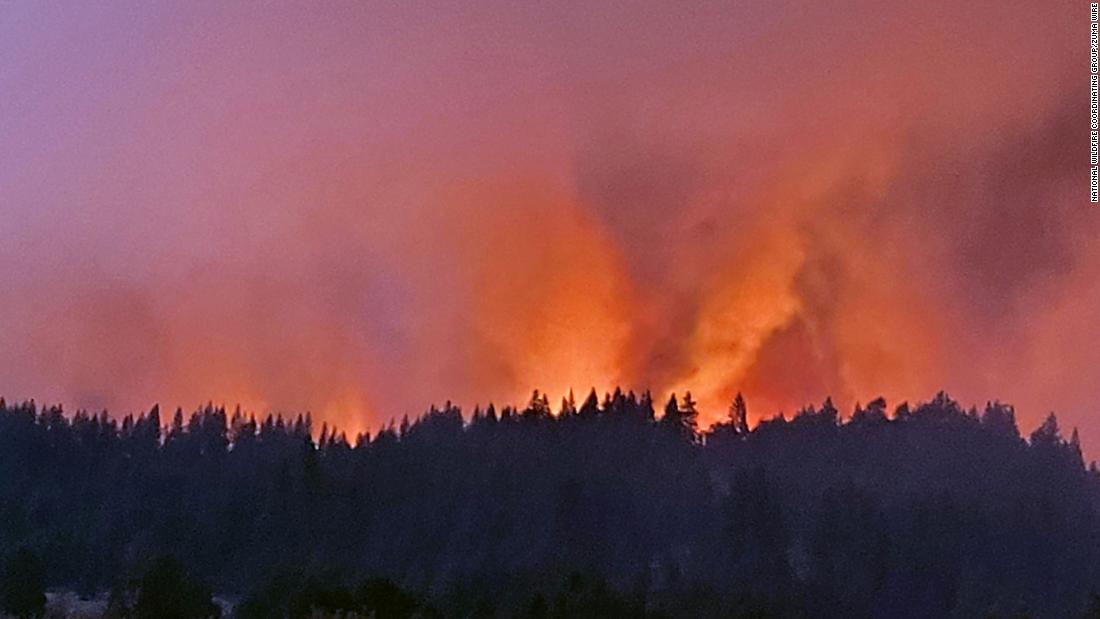 There are currently 80 large wildfires raging in 13 states …